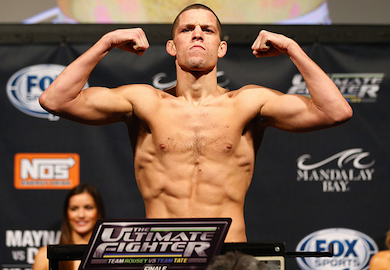 “I want the Matt Brown fight. That’s what I’m looking for. I’m trying to fight the baddest motherfuckers out there. I’m not trying to fight some lame ass fighter that they’re trying to build off of me.

“My brother is retired. So if this guy wants to fight a Diaz, he’s got to fight me.”

Nick Diaz has been retired since his decision loss to Georges St-Pierre, at UFC 158, over a year ago. The former Strikeforce welterweight champion has stated on numerous occasions that he only fights for money and he doesn’t want to return until he gets more of it.

The younger Diaz, Nathan last saw action In November of last year, and according to reports is also seeking more funding before agreeing to any fights.

The UFC has turned down both of their requests.