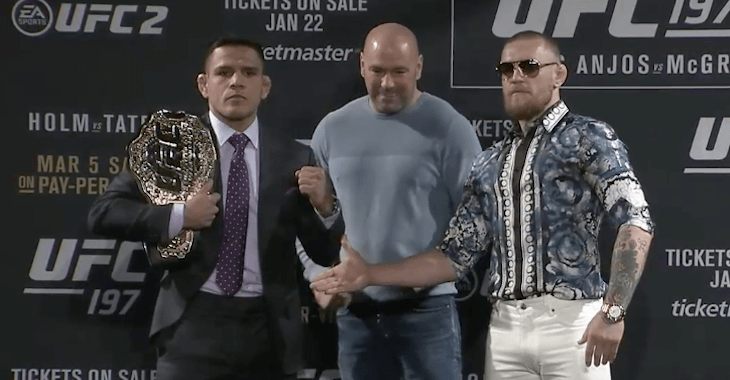 Those are famous words from the UFC featherweight champion Conor McGregor.

As one of the biggest stars in the UFC, there has been talk that McGregor would like to be a co-promoter along with the organization. MMA legend Bas Rutten spoke on Submission Radio recently and expanded on how McGregor may start being able to do that and change the game (transcribed by Mixed Martial Arts):

“I do believe that he holds all the cards now,” said Bas. “He’s so…everybody wants to see him. Whether you want to see him win or lose, it doesn’t matter, you want to see him. And I don’t know, what were the pay-per-view buys in the last show? I never got that. Did you guys get the numbers?”

“You see, so we’re talking about like four, five hundred-thousand more pay-per-view buys than a normal show will have – lately then, right?” said Rutten. “Because in the early days we had shows [which drew] 1.3, 1.6 actually, and 1.1. I think those are the records – but I think McGregor, if he fights against Rafael Dos Anjos, the way he promotes it, that could be a 1.5, 1.6, it could break the records.

“And why not tell, as a fighter, say ‘okay normally you get like four bucks or three seventy-five per pay-per-view buy’ – I don’t know what the contract says – ‘but he can say okay, what about once we go past 1.2 million, everything after that I just want half’. You know? And they’re going to be stupid to say no. Because if they say no, they’re going to miss out on all that money. If they say yes, it’s going to great for them and it’s going to be great for McGregor, and that will open barriers also for bigger paydays.

“But then now also everybody has the blueprint of McGregor. I heard Diaz saying – Nate – he said ‘yeah we kind of gave him the blueprint, the way he presents himself’. That’s absolutely not true. He doesn’t use any profanity, he’s very smart in everything that he’s saying, and the way he’s attacking, he’s doing it completely different and he’s doing it very smart. And I think more fighters should start taking a look at that and say ‘hey, wait a minute, yes it’s a fight and I understand that, but if you wanna make more money, well you’re going to have to tone it up a little bit.”