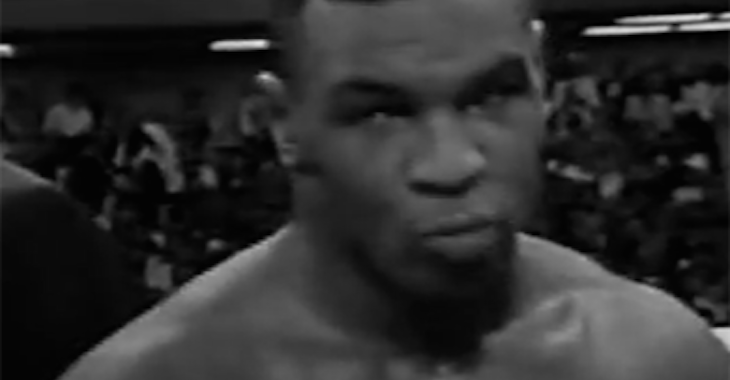 With a new film coming out (see above), former heavyweight boxing champion of the world Mike Tyson is opening up and talking about his career.

“Mark Twain said boxing is the only sport where a slave, if he’s successful, can rub shoulders with royalty,” says former heavyweight Mike Tyson, who once knocked out 19 opponents in a row. “Can you imagine that? Just by fighting another human being, he can meet a king, a prince, a queen, eat at the same table with them, be invited to the castle.” Or in modern times, make $30 million in one fight, build your own castle, stock it with tigers and still wake up every morning the pawn of powerful men who make money off your sweat.

…
“Since the beginning of time, it was the lowest sport in the history of entertainment, and it always made the most money,” Tyson tells the L.A. Weekly. “But the participants were worse when they finished than when they started. Only difference is now people know their names.” And these fighters were men like him: people with few options and little education, be they war captives in 65 B.C., African slaves in 1795, Irish immigrants in 1893 or a battered 9-year-old boy in ’70s Brooklyn, forced to rob houses to buy clothes.

“Extraordinary fighters come from the financial quagmire of poverty,” Tyson explains. “We’re the bottom of the barrel in society.” No wonder that when they do earn cash, they have no idea what to do with it except prove, sports car by sports car, how far they’ve come.

Meanwhile, boxers often trust the wrong advisers and ask the wrong financial questions, not even knowing what the right questions are. “A lot of skulduggery is happening on the part of the managers, the promoters — these people are taking advantage of fighters with impunity,” says Tyson, who himself sued Don King for $100 million. (The case was settled out of court for $14 million.) When a boxer’s body weakens, he fights cheaper and more humiliating fights until he’s forced to retire, often alone and broke. “It’s almost like selling flesh, real flesh,” Tyson says. “If he dies, they get another one.”

He sighs. “I didn’t understand me 15 years ago. I got old too soon and smart too late.”