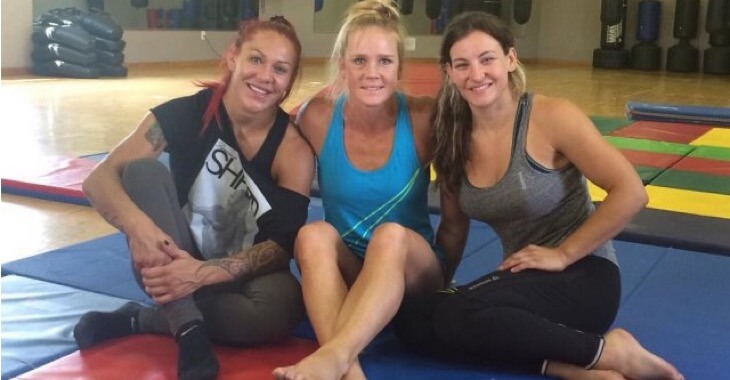 Miesha “Cupcake” Tate had a few doors close on the former Strikeforce champion, but an obvious door swung open over a week ago at UFC 193 and a very happy “Cupcake” knew that she may have the keys to position her next for the belt. Tate, fighting out of Las Vegas, NV, a 17-5 MMA 4-2 UFC fighter, is on a four fight winning streak since facing the former champ Rousey at UFC 168 in defeat almost 2 years ago. Tate shares her views and points as to why she should be next in line.

“Here’s why I think the fight with Holly and I makes sense — for one, I haven’t ever fought Holly Holm before. For two, I was Ronda’s biggest challenge until Holly, so obviously I’ve proven that I’m a standout in the division and so is Holly,” Tate said. “If Holly would beat me, then they could still set up that great rematch that they want between her and Ronda. If I beat Holly, then I’m 5-0, and I beat the girl who beat Ronda, what better case could they ever make to have me fight Ronda again? I think that fight sells itself.”

She continued, “I don’t see myself breaking ever in a fight, and I think Ronda was broken in that fight. It’s just different. I think I’m more comfortable on the feet and not to say that I think I’m a better striker than Holly, I wouldn’t venture that far by any means, but I think I’m more patient and I don’t think I would be quite as desperate to run in like a bull chasing a matador. It’s about time, it’s about experience and I think that the fight is an entirely different matchup and I like that matchup with Holly. I think it would make a fantastic fight. The thing is, she’s going to be out too long and I’m ready to go and I think Holly’s ready to go, so let’s set it up in the meantime. When Ronda comes back, she’ll have a quality champion to face.”

With what we know about Miesha, her style and matchup with Holm will be an entertaining one. Classic grappler vs striker.  Would you pick Tate to be next?