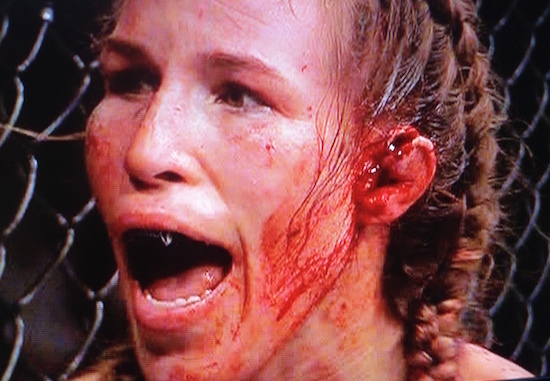 In one of the most gruesome injures in UFC history, Leslie Smith had her cauliflower ear exploded by Jessica Eye at UFC 180 last weekend (See that HERE).

After the bout, a gruesome image surfaced of the ear (See that HERE).

Smith spoke to ESPN about the injury, and her hopes to return to the Octagon in early 2015, but won’t be looking for a future in ear modeling.

“My ear is not feeling nearly as bad as you’d think it would be feeling. But I can say, my days as an ear model are over. I laid down in the back and watched the replay and then it was like, ‘Oh okay, I understand why the fight had to be stopped.’ Then the doctor came in and numbed it, so he could stitch it back together. He just used one long thread and he kept going and going and going, like he was sewing a blanket or something. I think it took at least an hour. They told me that night that I cannot fight for 50 days. I saw an ear specialist when I got back to the U.S., and he said the stitch job was really well done. I can say, I will be wearing headgear for the rest of my life. I had been draining my ear every month for a while, and I was getting three full syringes of fluid out every day. So I knew my ears could be a problem. There is a coolness factor to having a cauliflower ear. But at this point, my cauliflower ears are not screaming hot and sexy.”