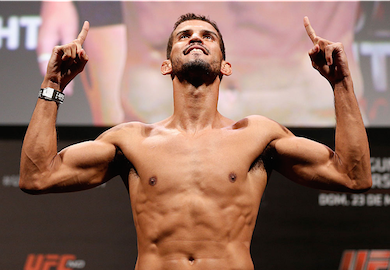 Leo Santos picked up a win over Efrain Escudero this past Saturday at UFC Fight Night 51, however he admits he had trouble with his weight cut. His teammate, Renan Barao was forced out of his UFC 177 rematch against TJ Dillashaw after hitting his head after passing out when he was cutting weight. Despite both fighters having hard weight cuts, Leo Santos defended Nova Uniao, and Andre Pederneiras’ weight cutting method.

“I had cramps all night and couldn’t sleep, that was a big issue, but I was physically well and able to fight three rounds, but the cramps were an issue.”

“I told [Andre Pederneiras] that I wanted to do a test, gain more weight on fight night — it worked, but it was exhausting. t took me longer to cut the weight. In Natal, I couldn’t gain much weight, and now I was stronger than my last fight.”

“Ronny Markes was the first Nova Uniao fighter to ever miss weight in the UFC, and Barao didn’t even make to the scale, unfortunately, because of an accident. People say a lot of things, but Barao was closer to the title, he was about to bring this title back to Brazil, and people talk a lot of crap.”