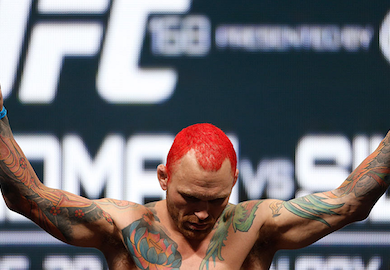 Life after the UFC isn’t all that great for many men.

Just take a look at Ken Shamrock these days.

While we are all a victim of our own personal choices, one would expect a 9-year, 22-fight UFC veteran, like Chris Leben to be slightly better off than he would suggest.

To his detriment, the retired UFC middleweight had a drug dependency issue that he admits cost him all his earnings. But now, nearly a few months removed from his final bout inside the cage and ‘The Crippler’ wishes he would have never fought at all.

I wish I would’ve drove truck last 10yrs, then at least is have insurance to see a counselor. Ufc left me broken with nithing

The Embattled UFC middleweight left the UFC following a lackluster performance against Uriah Hall at UFC 168. The defeat marked his fourth straight loss and saw the TUF 1 competitor go just 4-7 in his last 11 bouts.

Leben later went on to explain what prompted this sudden outburst and he even thanked the UFC for reaching out to him following the tweet we posted above.

I lost my dog and fucking lost it! Sorry please disregard my prev tweet! He was a family member:(