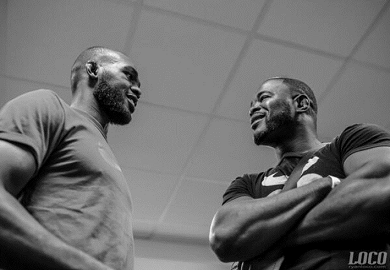 It’s been almost two years to date since light heavyweight kingpin Jon Jones and former light heavyweight champion Rashad Evans duked it out in the cage, and according to the two former teammates, it seems the two have reconciled their differences.

For those that are unfamiliar with the situation, Jones and Evans were once more than teammates. Evans was Jones mentor inside as well as outside of the cage, and the pair were close friends. All that changed however and the two were at odds inside and out of the cage. The conflict came to a head at UFC 145 where Jones defeated Evans via unanimous decision.

Evans was present at the UFC 172 weigh ins yesterday supporting his fellow Blackzilians teammate Anthony Johnson in his UFC return. Jones, who is headlining the card, saw Evans and struck up a conversation. Jones spoke to Ariel Helwani on the situation saying:

“I saw Rashad and I honestly missed him. It was weird. I just missed him. The guy was definitely like a role model in a way when I first started off and I’ll always remember looking up to him.”

Jones went on to say:

“Even though we have fought, it is so long in the past now and I legitimately missed him.”

Evans took to his personal Instagram to comment on the situation, posting a picture of Bones and himself with the caption:

“It’s been a long time since @jonnybones and myself got a chance to catch up. I’m glad we did! If you are blessed enough, life has a way of bringing you around again. Good luck tomorrow @jonnybones! Living the blessed life! #ufc172”

“All respect @SugaRashadEvans that was great.”