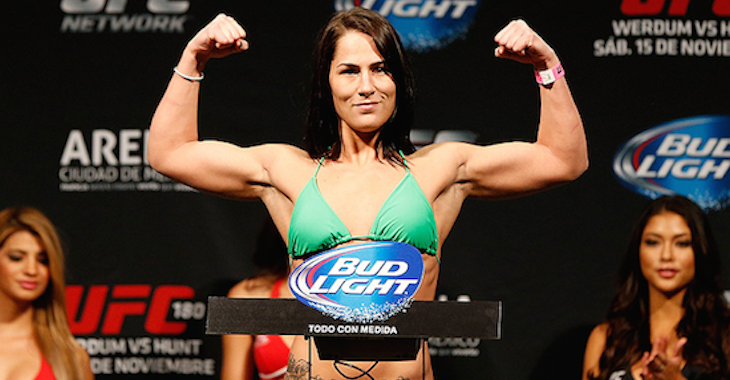 Jessica Eye seemed to be going in the right direction for a shot at UFC gold when she defeated Sarah Kaufman at UFC 166. It was her octagon debut and the division was new enough so that she could rally for a shot at Rousey’s gold, but a failed drug test put an end to all of that.

Eye tested positive for marijuana and her victory over Kaufman was overturned to a no contest. She would later go on to lose her next fight in a controversial decision against Alexis Davis at UFC 170. Despite all of that, though, the UFC has been behind her the entire way and actually views her as undefeated in the octagon.

I’m not a bad person. I don’t do bad things— I’m capable of making mistakes, and I’m very capable of making change too,” Eye told VLAD TV in a recent interview. “I’ve been very lucky that the UFC has been behind me 100%. They look at me as 3-0 right now in the UFC even though I’m not right now, you know? I’m 1-1-1. I’m blessed to be given those opportunities for that.”

“I tested positive for one nanogram [of THC] at the lowest state level in the world. I mean, I could have got a FBI job if I wanted to.”

Now, Eye will have a chance to prove herself against one of the divisions top contenders in Miesha Tate. The two will collide at UFC on Fox 16 in Chicago, Illinois in July in what is likely to be a championship eliminator. Who do you think will walk out with their hands raised?