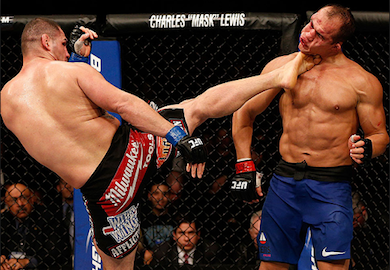 Earlier in the week, UFC heavyweight champion, Cain Velasquez stated that in his second fight with JDS, he opted to punish him for five-rounds instead of finishing him off earlier.

Dos Santos is calling BS and he broke down why to Yahoo Sports:

“I didn’t lose because he’s a better fighter than me, it’s that I didn’t react like I am used to doing,” dos Santos said. “That was the worst part about it for me. As I watched the fight again, I was saying, ‘That’s not me in there.’ I didn’t react to situations that came up.

“That is very tough, and it’s very frustrating for me. I knew what I should do, and I didn’t do it when I wanted to.

“I laughed a lot when I heard he said that,” dos Santos said. “I’ve always respected him. But I gave him a lot of good positions where he could finish me, and he wasn’t seeing them. One time, he caught my arm and he didn’t know how to finish me with the arm bar. And this is the truth: He didn’t finish me because he wasn’t able to do that.

“He can say [whatever] he wants, but I know this: He gave everything he had to win that fight, and you could see at the end of the fight that he was really tired, and he tried to finish that fight very much, and he couldn’t.”