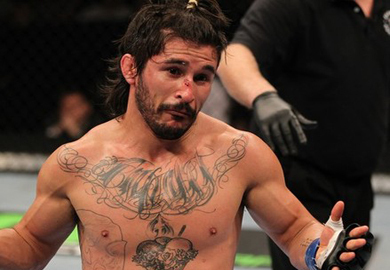 UFC Flyweight Ian McCall is coming off an excellent performance against Brad Pickett at UFC Fight Night Dublin. After the bout McCall was asked who he would like to fight next, to which he replied with the fair answer: Demetrious Johnson.

McCall spoke to Sherdog.com this week to discuss his plans for getting a shot at Demetrious Johnson’s title belt.

“Demetrious has got my belt,” said McCall. “I think, in the landscape of the division, I pose the biggest threat to his crown.”

“I think if I get a guy like Lineker next while he fights someone else… But, I am fine with fighting again [before a title shot]. I don’t mind. He’s fighting next month, so that’s enough time for us to get our act together.”

“I felt like I won. I dominated the whole fight, every aspect of it. Like I said from the beginning, speed kills in this division,” McCall said. “Brad… y’know, he’s a 135er. I think the weight cut killed him, and the speed advantage that I had just completely killed him… He is bigger, but I don’t feel like he was any stronger. I don’t know if that was from a heavy weight cut or what. He looked like he was having a hard time all week.”