Home » UFC NEWS » Phil Baroni Believes He Is Among The Last Of A Dyi... 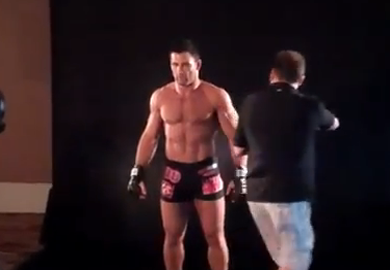 Phil Baroni is an MMA veteran, with 32 MMA bouts, and 10 boxing matches, Baroni started his career in 2000 and has been through it all. From the UFC, to Pride, to Strikeforce, to ONE FC, numerous smaller shows, and now Bellator where he will fight on Friday against Karo Parisyan. Baroni believes he is the last of a dying breed of gladiators. He wrote his thoughts in a blog for Bloodyelbow.com

My camp has gone great. I’m back at OKG, One Kicks Gym. I don’t even know what the f*ck made me leave in the first place. I f*cking feel at home now. I was homeless for years, and I realize that now.

It’s just crazy. I’m 100% on the coaching philosophy, on the pads, on training, everything. It’s like I’m plugged right back in. It’s like I never left. I’m stronger, punching harder, and am in much better condition. All systems are a go. I’m locked and loaded, and I’m gonna blast this f*cking guy’s head clean off.

Yeah, I know I’m the underdog. I’ve been off for a long f*cking time and I pulled out of two fights at both ONE FC and Bellator with injuries. But that was because I was training hard and building my body back to full strength, while training for a fight. It was a mistake and I know that now. So f*ck it, I’m ready and able now, and that’s all that matters.

It doesn’t faze me one bit that people consider me the underdog going into this fight. It’s understandable, but I don’t give a f*ck. Friday night, we will see. We will see me at my all time best, when blast this kid the f*ck out of there.

Oh, and it’s funny how these stories are getting out now. Yeah, it’s true that I’ve subbed and KOed 2 heavyweight champs. Crazy really.

The sport has developed so much since I first stepped foot inside the Octagon. See, when I first made my way to the cage, the shit wasn’t totally legal yet. There weren’t any fights in Vegas. There was no mainstream media coverage. There was no pot of gold at the end of the rainbow either. It was just a bunch of rough and tough guys who wanted to show the world how tough we were, how great we were, and how big our cock and balls really were.

No networks like Fox covering the events, no reality shows. It’s was an underground subculture. The baddest dudes in the world getting in a cage in their underwear, battling it the f*ck out. It was blood sport, simple as that. The baddest motherf*ckers in the world all coming together to fight and see who was really the f*cking guy, the f*cking ‘Man’.

There was no strength and conditioning experts. No gyms with high-tech training facilities, or BS super camps with tons of top notch training partners in a revolutionary training environment. It was guys in the raw, getting in a cage and testing themselves, their beliefs, their training philosophies, and their manhood. It was as simple and as raw as that.

So if you’re an old fan, savor it. If you’re a new fan, do some research because you’re about to witness a time where the few who remain will battle to the end. Once we’re gone, the generation of gladiators will be over and never to return.

Don’t miss my fight with Karo Parisyan on Friday night to see two of the true pioneers and dying breed square off in Strikeforce… I mean, Bellator Fighting Championship.

After I blow through and dismantle Karo, I’m gunning for the biggest and best both Bellator and ONE FC has to offer. I’m going to train old school with One Kick Nick and our under the radar team of gully young hungry soldiers, and once and for all stake my claim at the top of the heap… at 155 lbs.

So go do your fancy high-tech training. Go eat your Dolce diet and have fun with your world famous coaches. I’m gonna spar hard at OKG, and do my old fashioned road work… and when I meet your state of the art modern day Mixed Martial Artist ass, better not forget to duck!