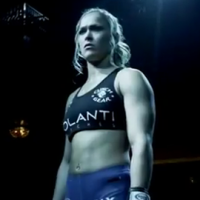 Rousey has always been an outspoken fighter and compares her own hype skills to that of Chael Sonnen:

“I think it’s a similar idea. Chael has more of this character that’s very opposite from who he is behind the camera. When you have the camera on him and you have the camera off him, it’s very very different,” Rousey said. “If there’s a camera on me or off me, it’s roughly the same just a lot less energy. I think he has an different personality he created for MMA.”

As for the UFC 148 main event, Rousey said that the challenger has no chance in this rematch:

“I think that Anderson Silva pissed off and healthy is going to destroy Chael…I think a lot of questions will be answered in this fight. I’m excited and so is everyone else.”

Rousey will be defending her title later this year against Sarah Kaufman. Rousey will be looking to keep her armbar streak going with another quick submission victory over Kaufman, marking what could be the first title defense.

For all your UFC 148 news, stay with BJPENN.com for results and fight breakdowns for the biggest card of the year.

For the full interview check out The Bleacher Report.