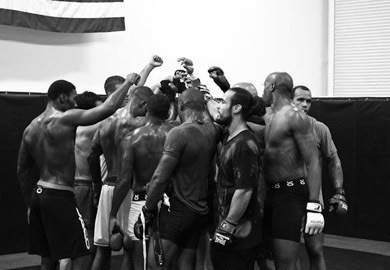 FUEL TV is excited to announce the premiere of TRAINING DAY: THE BLACKZILIANS, onWednesday, November 28 (11:00 PM ET). The FUEL TV original gives viewers an all-access look at the group of elite mixed martial arts fighters that form the Blackzilians team.

TRAINING DAY: THE BLACKZILIANS highlights founders and members of the Blackzilians including former UFC Light Heavyweight Champions Rashad Evans and Vitor Belfort, UFC heavyweight Alistar Overeem, and UFC lightweight Michael Johnson in exclusive interviews and following them through their training. In addition, owner Glenn Robinson and coaches Mario Sperry, Henri Hooft, and Babak Nejadmoghaddam are showcased working with the athletes in the South Florida gym.

Evans explains the goal of the group in the show: “This is where we sharpen the tools to go to war to put on the fights that you like to see,” he says. “This is where we are becoming the best team in the world.”

Overeem envisions the Blackzilians being recognized as home to the best fighters: “My prediction is in one year everyone will know we are the best team in the world. We already are, but it’s going to take one year for the rest of the world to know.”

The Blackzilians have created a unified team that thrives on the ideals of brotherhood, family and lifestyle. Their slogan “no one is better than all of us together,” embodies the camaraderie and strength that the fighters feel by training with one another day in and day out. Aspiring MMA fighters get the chance to train with elite UFC champions, but they all get treated equally. “My goal is not just to create champions on the mat,” says Head Coach Mario Sperry. “I am here to try to make better human beings.”

During the show, Johnson explains the origin of the team’s name: “It all started out like a joke. [I was with] Danillo Villefort, one of the original members. We were all siting around, like me, him, and Rashad Evans and we looked at the mat. At one point it was just half blacks and half Brazilians. So you know, nothing real racial, you know? It was all a joke. So we said why not call the team the Blackzilians?” The name stuck and has represented the team since their inception in 2011.

This is the second TRAINING DAY special from FUEL TV. The first TRAINING DAY show featured Montreal, Canada-based Tristar Gym earlier this month. Look for FUEL TV to continue to get exclusive, inside access to the top MMA gyms around the world.