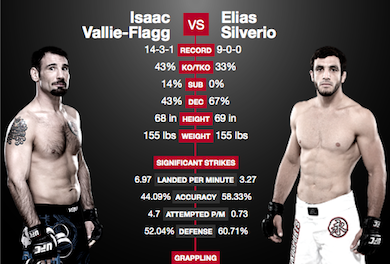 Elias Silverio showed everyone why he was the favorite to win tonight despite facing an opponent on an eleven fight win-streak.

Issac Vallie-Flagg pressed the action right from the start. Both men would make their way back to the center of the octagon often, but it was always Vallie-Flagg that would push the action to the cage looking to cut his opponent off. Seeing this, Silverio landed a takedown that seemed to have no effort put behind it. He pressed Vallie-Flagg against the cage which allowed him to wall-walk back to his feet.

Back in the middle of the octagon, Vallie-Flagg ate a left hook that caused him to fall on his bum. Silverio hesitated then followed up with a big elbow, but Vallie-Flagg was fine. While he was still in bad position on the bottom, he was fortunate enough the shots didn’t end the fight. Silverio got a hook in and used short shots to the head and gut of Vallie-Flagg to transition to better spots. Vallie-Flagg used the cage to stop Silverio from getting in position for chokes, and the fight ended up making its way back to the center of the octagon, standing. Silverio ended the first round by landing another hook, this time with his right hand.

With the first round in his pocket, Silverio walked into round two with confidence. Vallie-Flagg ended up on his back with little struggle yet again and Silverio was able to grind some energy out of his opponent. Silverio was in full control of the fight until he kneed the head of Vallie-Flagg while his knee was down. It looked like the knee landed on the chest, but the referee took a point away anyway. Vallie-Flagg seemed to be reinvigorated with the resting time he was given, but Silverio pushed the action yet again and plopped Vallie-Flagg right back on the ground. Just like the first, the second round ended with Silverio dominating his opponent. Would the point effect the outcome, though?

Knowing he was down two rounds to none, Vallie-Flagg started throwing a lot of different strikes hoping one of them would hit. Silverio dodged almost every single one and successfully countered with shots of his own. Silverio once again dragged Vallie-Flagg down to the ground and gained back control with two hooks in. Vallie-Flagg eventually got him back to half-guard, but he was still taking punishment from there.