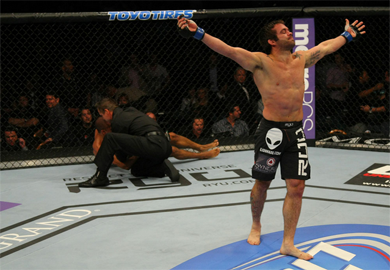 The injury bug hits another highly anticipated fight as Terry Etim (15-4) has been forced out of his upcoming bout with Joe Lauzon (21-7) on the UFC on FOX 4 card, which is scheduled to take place on August 4th at the Staples Center in Los Angeles, California.

Replacing Etim will be Jamie Varner (20-6-1, 2 NC) in a fight that could turn into the second high-profile win for Varner after his first-round destruction of highly touted lightweight prospect, Edson Barboza at UFC 146 in a fight that pitted Varner as a huge underdog.

For Lauzon, this will be his first fight back since his KO loss to Anthony Pettis at UFC 144. Lauzon will surely be looking to get back on the road to a title shot, starting with a win over lightweight dark-horse, Jamie Varner.