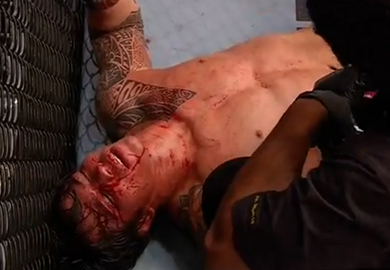 Erick Silva was carried out of the octagon on a gurney and there was some concern from Dana White that he had suffered a concussion along with a broken jaw. Luckily, that is not the case.

Dana White released a tweet earlier this morning that Erick Silva received a clear bill of health and he is set to fly home later today.

Welterweight Erick Silva was on the wrong end of a beating that could not end any sooner. Despite taking a serious whooping, he still got his shots in and there was a point where it looked like he had finished Matt Brown with body shots. Brown pushed through the pain and ended up turning Silva’s face into ground beef. Their performance earned them ‘Fight of the Night‘ honors when all was said and done.

If you missed it, check out the highlights of the fight by clicking HERE!