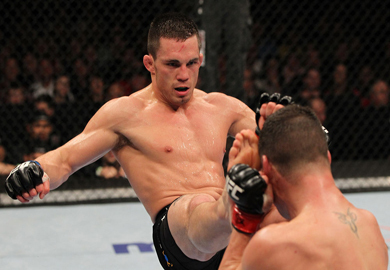 “We are going to cross paths at some point. I’m sure of it. Whether it comes this year, next year, or the year after; Johny Hendricks and I are going to fight. It’s a stance I’ve taken and I’m not going to back off of that. Like I said, nobody wants to fight him because he’s a wrestler and he has power. I think I have him figured out, and I’ve been saying his name for the past year and trying to get inside the cage with him. I had the fight, but then he found a way out. I want to fight him so bad and I believe I can beat him. I want to wear Johny Hendricks’ teeth as a necklace.”

The two were originally scheduled to fight at UFC 158 but a Rory MacDonald injury shifted Hendricks into his bout with Carlos Condit and pitted Ellenberger against Nate Marquardt.