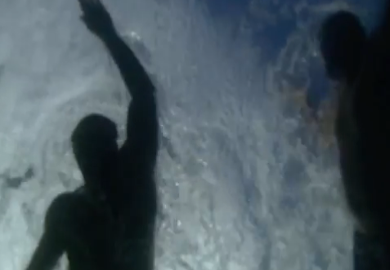 UFC superstar BJ Penn has a new opponent lined up. Not in MMA, but in the Lavaman Waikoloa Hawaii Challenge on March 24th. It is a charity triathlon, and his competition; Professional Surfer Sunny Garcia.

The two challengers are legends in their respected sports, and will not take each other lightly. The proceeds of the event will all given to charity, but make no mistake about it these two are competitive. They both will be gunning for victory, especially since the competition is being held in their home state of Hawaii; Garcia being born in Maili, which is on the Westside of Oahu and Penn who was born in Kailua.

The competition is not all Penn and Garcia will be participating in, as the event has a weekend filled with activities. On Friday March 22nd, there is a 5k Run/Walk event where they will be on hand to give out the awards for the event starting at 5:45pm and finishing around 6:30pm.

On Saturday March 23rd, the men will be on hand to meet fans. They will take an hour out of their busy training schedule to come down to sign autographs and take pictures. It will be a great opportunity for fans to meet two of the biggest legends of MMA and Surfing.

Then on Sunday Penn and Garcia will compete in the triathlon. Penn has a start time of 7:35am, and Garcia a 7:40am start time. They will begin with a 1500 meter swim that starts at Anaeho’omalu Bay at Waikoloa Beach. Once finished with the swim they will move to the Bike portion of the event.

The Lavaman Waikoloa Triathlon bike is a 40 kilometer, which will take place on a portion of the Iron-man World Champion Bike Course. The trail runs along the Pacific Ocean, and the men will ride past Keawaiki Bay past Kiholo Bay, all the way to Kukio Bay where they will turn around and return back Anaehoomalu Bay. They then will move to the final stage of the race.

The run is a 10 Kilometer run that will be the most grueling and will test both men’s conditioning. The run is described on the Lavaman Waikoloa website as:

“The run starts with a lava field run, then on fast street sections and then a tour through the Hilton Waikoloa Village resort grounds. The run finishes with epic one mile single track beach trail to the sandy beach finish line.”

Who do you think comes out on top? The 2X UFC Champion, the second UFC fighter in the history of the organization to hold titles at 2 different weight classes(Welterweight & Lightweight), BJ PENN? Or the 2000 ASP WCT World Champion, the WQS record holder for victories, and holder of six Triple Crown of Surfing titles, Sunny Garcia?