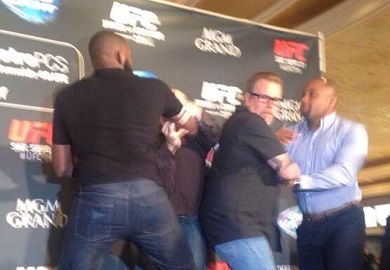 Moments ago, in Las Vegas, Daniel Cormier was sentenced for his out-of-cage brawl against Jon Jones. (Replay HERE)

– No suspension.
– Fine $9,000.00
– 20 hours of community service to a mix of charitable organizations in Las Vegas, to advance a message of anti-bullying.
– 3rd party verification of Community Service hours must be provided before receiving a license to fight.

Daniel Cormier is slated to fight Jon Jones for the UFC’s light-heavyweight championship at UFC 182 in January.

Jon Jones received his punishment today as well. Here’s what he got.