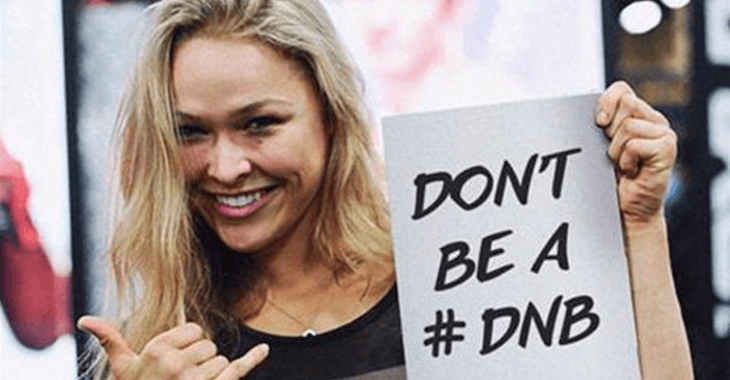 One of the biggest things to come away from UFC 190 was the ‘D.N.B’ slogan created by UFC champ Ronda Rousey.

The three letters, which stand for ‘Do Nothing B*tch,’ were a part of a monologue Rousey did while on an episode of the UFC 190 Embedded series. She said:

“I have this one term for the kind of woman my mother raised me not to be, and I call it a ‘Do-Nothing Bitch,’ or a ‘DNB.’ It’s the kind of chick that just tries to be pretty and be taken care of by somebody else. That’s why I think it’s hilarious when people say that my body looks masculine or something.

“I just say, ‘Listen, just because my body was developed for a purpose other than f-cking millionaires, doesn’t mean it’s masculine. I think it’s femininely badass as f-ck because there isn’t a single muscle on my body that doesn’t have a purpose because I’m not a ‘Do-Nothing B-tch.”

After that the phrase blew up. Rousey sold shirts with the slogan on it, selling more than 50,000 in a few weeks. Most recently it was used by superstar artist Beyonce at one of her concerts.

On the recent episode of FS1’s ‘The Herd,‘ UFC president Dana White talked about the phrase and said he was really close to editing the clip out of the Embedded episode, until he finally decided to leave it in.

“Beyonce just literally took those quotes this last weekend in her ‘Made in America’ concert and basically ran this whole Ronda Rousey clip in her concert about this. Apparently there’s a movie being made about it now. I was literally sitting in the edit bay wondering if I should even let this air. We put it out, and now it’s the biggest thing happening with women.”