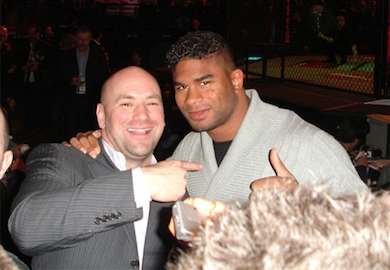 “I have a feeling this rib injury is going to last as long as it takes for dos Santos to get another opponent. That’s what I’m willing to bet. This is going to be the longest rib injury ever. As soon as we get dos Santos a fight that rib is going to heal right up.

“[Overeem] marches his fucking ass in here. Tells us how much he’s worth. He’s worth all this money, he’s the best heavyweight in the world, he’s going to be the champion, and he doesn’t want to fucking fight anybody. I bet you his fucking rib wouldn’t be hurting if we got Brock Lesnar, bet you his rib would be fine… did anybody hear anything about a rib injury until I offered him dos Santos two different ways?

“You guys come to whatever conclusion you want to on that, I know what the truth is.”

What else needs to be said here?

Yesterday we learned that Alistair Overeem had turned down an important heavyweight bout against Junior dos Santos.

At a recent media luncheon in Las Vegas, Dana White, continued his verbal assault on ‘The Reem’.

(MMAJunkie gets the transcription props on this one. Thanks guys)