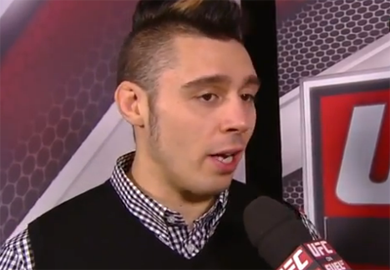 Former UFC welterweight title challenger Dan “The Outlaw” Hardy has not fought inside the octagon since a September of 2012 win over Amir Sadollah, due to medical reasons.

The British star was diagnosed with Wolff-Parkinson syndrome, a heart condition which can lead to an accelerated heart beat for periods at a time.

While many thought the diagnosis would spell and end to his mixed martial arts career, it appears that Hardy’s fighting days are not over and he may be cleared to fight again soon.

According to “The Outlaw,” he has never suffered from any of the symptoms associated with Wolff-Parkinson syndrome. With that said, Hardy believes that the issue lies with the U.S health-care system, as he had consulted British doctors, who have confirmed that he does not need to have surgery.

“The health-care system is a business in the US,” Hardy told The National. “I never had any preconceived notions but it always surprised me that you can’t walk into a hospital in one of the most powerful countries in the world and get treatment. “It’s just the way the system is set up. Unfortunately, because it is a business, every doctor is a salesman. Is that not a conflict of interest? A guy trying to sell you surgery is trying to make money off it. Why would he give you an honest opinion?”

The conflicting opinions between the doctors in the UK and those here in the U.S have placed Hardy in a tough situation, as the welterweight requires doctor’s clearance in the U.S before he can be scheduled to fight again for the UFC.

“That is only a preliminary stage to getting cleared to fight. I have to go back and see that doctor in the US and see what his suggestion is now. At least I feel confident that my decision was the right one.”

Hardy went on to say that the only mixed martials arts organization he would ever fight for is the UFC:

“I wouldn’t fight MMA for other organizations. As much as I love that we have others out there, I’ve become so accustomed to being a part of the UFC machine, it wouldn’t feel right. I wouldn’t have the same kind of passion to compete as I do here.”

What are your thought’s on Hardy’s most recent statements? Let’s hear it Penn Nation!

Props to BloodyElbow for finding the interview.