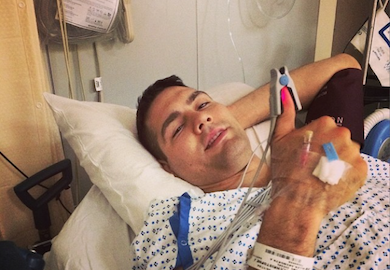 On Monday, rating UFC middleweight champion Chris Weidman underwent successful surgery on both of his knees.

The “All American” is scheduled to defend his title against former light heavyweight champion Lyoto Machida at UFC 175 this July.

Many fans and media members have had their doubts regarding whether or not Weidman will be fully recovered and ready for the July long weekend event, but the champ recently told Ariel Helwani he will be ready:

“I just talked to Chris Weidman and he said he’s doing great, already lifting and on the bike and he’d definitely be ready for July 5th.”

UFC 175 takes place July 5 live from the Mandalay Bay Events Center in Las Vegas, Nevada. The event is headlined by the Weidman vs. Machida middleweight title fight and also features another middleweight clash between rivals Chael Sonnen and Wanderlei Silva.