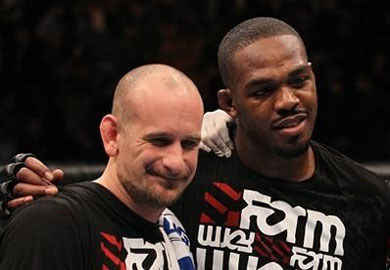 “I certainly don’t think it would be a wise strategy to get Jon really mad, but that’s something [Sonnen will] have to decide for himself. When you get into Jon’s face, that’s definitely when he performs the best, for sure. [Jones is] very articulate, and he gets right to the point. It’s just that trash-talking isn’t usually his thing, but Jon is going to be one of the greatest fighters ever. That’s my belief. He’s something special, and he’s going to be at the top of the heap… I always feel that everybody has a legitimate chance, because it’s MMA. It [may not be] very likely, but there is no such thing as 100 percent. You have to believe that, because you have to stay hungry. If you [think], ‘Well, I’m just going to beat this guy,’ that’s usually the time that you get beat yourself. My job is just to make sure that we can get those chances as much as we can into Jon’s favor.

“Sonnen is a great fighter. I’ve been in the trenches against Sonnen several times and seen what he is capable of when he is on, and [I’ve seen] what he does well. I would never disrespect Sonnen by saying, ‘Jon will roll right over this guy. That’s a gimme fight.’ Those fights don’t exist. I’ve been a veteran of this sport for 20 years. I’ve done more corners than anybody, by far. I’ve seen examples of things that we should have 100-percent won — just walked over people — and it’s either a tough fight, or we lose.”

“[Sonnen is] a heavy pressure fighter. He gets inside your range really well. People like Rashad are amazing fighters, but they play on the outside and then hit these wicked, very fast shots. Sonnen is a guy who is left-handed, and he brings a different kind of style than what Jon has faced before, which is exciting for both myself and Jon. [Sonnen’s] grinding, in-your-face style can be nullified. There’s no doubt we can nullify it, but it is a little bit different than everybody thinks it is. Losing to Anderson Silva twice doesn’t mean that [Sonnen] is washed up or that he’s not effective as a fighter. He’s actually a very good fighter, and he deserves a lot of respect.”

After yesterday’s announcement that Chael Sonnen and Jon Jones will be facing eachother in April, famed Jones coach, Greg Jackson took to sherdog.com to discuss the upcoming bout.

Giving Sonnen all the credit in the world and a legit shot at beating his champ, Jackson lays down a warning to the challenger to not get too far into the the trash talking with Jones as it will make the champ even more dangerous.