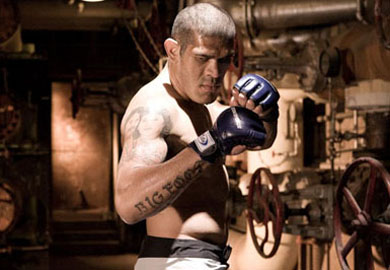 Through all the shifting that the UFC 146 card has gone through, its good to see that the co-main event is still intact and now features two men who will come together to make a very intriguing matchup before the Heavyweight title fight as former UFC Heavyweight champion, Cain Velasquez will take on UFC newcomer Antonio ‘Bigfoot’ Silva in a fight that could very well determine the next number one contender.

Both men are coming off knockout losses and both have contrasting styles ensuring that we will see diverse skills in a fight that will most likely take place in every inch of the Octagon.

For Cain Velasquez, a fight on the feet would be preferred. He is the more technical and agile of the two and should look to peck at Silva early on the dissect his strategy and unravel his mental fortitude. If and when Cain starts to find his range and timing, leg kicks should be implemented to cut Silva down to size and keep him guessing, as to let Cain open up more and deliver those deadly combinations. Cain is at a 5 inch reach disadvantage which could play a factor in allowing him to land flush shots. Cain is a tactician, however, and he knows how and where to hit to hurt his opponent.

Fighting someone who is coming off of a knockout may help Cain in that Silva will be defending strikes instinctively. This is when Cain takes the fight to the ground. It won’t be a matter of if he can but instead, when he wants to. Cain has a tremendous double leg, capable of driving any heavyweight to the mat. He will surely use this to bring Silva down and start landing his patented mechanized ground and pound to soften Silva and win the judges over. As for submission defense, Cain has it and knows where he needs to be at all times to avoid being trapped in any sort of attempt. Silva has only submitted two people in his career if you don’t count a tap out due to strikes, and even though he trains with the Nogueiras, Silva will most likely only look for one pnly as a last ditch effort or if he manages to drop Cain and find himself in a great spot to finish.

Of course this is all situational as Velasquez’s punches may very well find a weak chin that night. Silva seemed slow in his fight with Velasquez’s American Kickboxing Academy teammate, Daniel Cormier, whilst succumbing to his punches the second they landed. Silva really needs to stay on that bicycle and get out of danger as soon as possible.

For the UFC newcomer, Antonio Silva, he has surely been training his stand up game as well as his wrestling to ensure an even fight in his promotional debut. We may see a very solid wrestling base from the Brazilian. One that can at least challenge the takedowns of Velasquez. If put on his back, Silva must use his black belt in jiu-jitsu to negate the ground and pound of Velasquez by not allowing him to posture up and land shots. At least one of Silva’s arms should be either around Cain’s head or firmly grasped to a wrist as the other plants itself in the mat and forces his hips back and up, until he can find proper footing to stand back up.

If Silva decides to test his metal on the ground with Velasquez, he should be constantly threatening with submissions against every one of Velasquez’s limbs. If he only attacks arms, Velasquez will easily block these and build confidence on the ground knowing what Silva plans to do. Instead, Silva needs to throw all sorts of submissions even if he doesn’t plan on capitalizing on them. This will keep Velasquez off his guard and may even force him to stand up from time to time if he can’t pass Silva’s guard or posture up.

On the feet, Silva needs to use his reach and force Cain into the role of the aggressor. This should help Silva spot when Cain is going in for a takedown just a bit better as Cain would have to cover more ground. This will also help Silva avoid those deadly counters that Cain uses so effortlessly. Silva should let Cain come in and force the clinch. Silva proved dangerous in the clinch against Fedor and could possibly use his superior size to move Velasquez, possibly even tripping him to the mat where he can lay down his own ground and pound on Velasquez.

This is a big fight with big fighters where the winner is possibly guaranteed a title fight. Both men will be at the top of their form and they will both be ready to walk away from Las Vegas with a big win come May 26th at the MGM Grand Garden Arena in Las Vegas, Nevada.