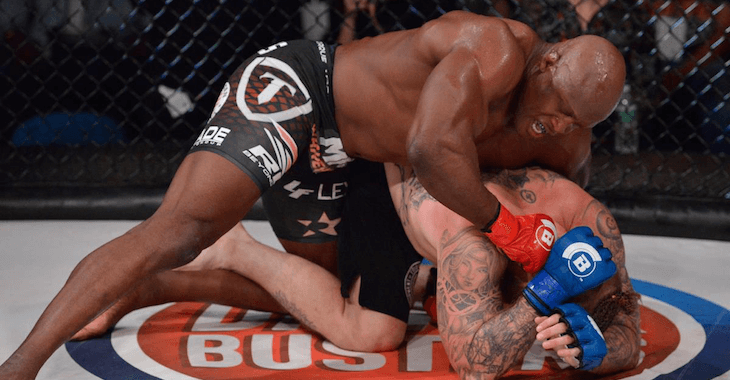 Bellator’s heavyweight division is slowly starting to develop into one worth following as the company announced another exciting heavy-fight for Bellator 145. Former WWE Superstar Bobby Lashley will be making his way into the Bellator cage for fourth time when he meets James Thompson at “Bellator 145”. Officials announced the booking on Friday’s broadcast of “Bellator 143”.

Lashley is currently riding one of the best streaks in the division with six consecutive wins under his belt. Since making his MMA debut in 2008, the former professional wrestler has become a bit of a journeyman in this sport having fought for nine different promotions before finding a home with Bellator. His last victory over Dan Charles took place in June and was about as dominant as a second round TKO could get. This will not be the first time Lashley went toe-to-toe with Thompson, though.

Thompson was the last man to hand “The Destroyer” Lashley a loss in 2012 when they met in India. Thompson made his Bellator debut when he stepped into the cage with Eric Prindle and knocked him out in less than two minutes.

Bellator 145 is set to take place on November 6, 2015 in St. Louis! Who do you have winning this heavyweight scrap? Share your thoughts and predictions in the comment section below!