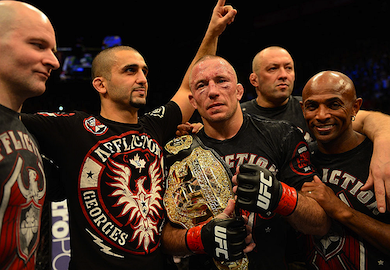 The crew here at BJPENN.COM is back to bring you another edition of ‘Quick Hits’ whether you like it or not.

‘Quick Hits’ made its debut last week and it brought the idea of an MMA themed ‘Pardon the Interruption’ to life. It may be text based and we may not have Tony Reali correcting us whenever we make mistakes, but that’s what you guys are for. Do you not like one of our opinions? Do you think we made a mistake? Let us know in the comment section! You may just make it into next week’s edition of ‘Quick Hits’.

Last week, we questioned whether Anderson Silva is the underdog or favorite. Tommy Littrell responded in the comments section with, “Definitely putting my money on Silva. Well, if I had the money then I would.” Hopefully these bets are legally being made Tommy! Otherwise, that’s f*****g illegal.

Join this week’s crew (Daneul Summers, Jim Chadwick, Evan Stoumbelis, Derek Langhorn, Brett Auten and Jon Kirschner) as we tackle the week’s hottest topics! Are these topics not hot enough for you? Tweet us!

YES or NO: Considering his recent victory, is it time to reinstate Paul Daley?

Considering his recent victory, is it time to bring Paul “Semtex” Daley back to the UFC?

YES – The Ultimate Fighting Championship fired Paul Daley in 2010 when he punched Josh Koscheck after the fight was over. Since being cut by the UFC, Daley has been staying busy in other promotions winning eleven of his last fifteen fights. Daley may have acted immature and there was a possibility he tarnished the integrity of the sport by punching Koscheck after the final bell, but the fact of the matter is that he didn’t. No major media outlets picked up on the incident and Daley has apologized multiple times. Even the UFC poster-boy Jon Jones stated that he thinks Daley should be given another chance. Paul Daley still has dynamite in his hands and he may never be a title contender, but he has the potential to put on a lot of entertaining fights. – Jon Kirschner

NO – There is absolutely no way that Paul Daley should be reinstated into the UFC. His actions are unquestionably the most disrespectful and uncalled for antics that have ever been displaying inside the Octagon. Striking another fighter after the bell is assault and does not represent the type of individual that should be a part of an organization like the UFC. Martial Arts and fighting is not a game. These men are the best of the best of those who have skills to seriously injure, and it should not be taken lightly when one of these fighters uses those skills outside of the ring or cage. – Daneul Summers

BUY – Ronda Rousey certainly deserves to be among the ranks in the UFC’s pound-for-pound class. “Rowdy” is 7-0 with seven submissions and dominates her weight class which I feel is a key component in being pound-for-pound fighter. If (or when?) she plows through Miesha Tate in devastating fashion come Dec. 28 it will only solidify her position atop the UFC women’s food chain.  As far her not being considered on the p4p list because of her experience, Rousey has just one fight under the UFC banner but she is a UFC fighter, which I believe is the only qualification needed, to be considered on the list. – Brett Auten

SELL – The term “pound for pound” is used to describe which fighter would win in a fight, if size were not a factor (it is NOT a popularity contest, which some people tend to forget)… I can hardly imagine Ronda beating some of the men that aren’t on the P4P list, and who ARE her size (Faber, McDonald, Cruz), so for anyone to place her on a pound for pound list is insulting to the other members of said list. On top of that, Ronda has had one fight in the UFC, and for anyone to use that as a basis to place her in the P4P talk is simply a ploy for shock value. – Jim Chadwick

FACT – Before we divulge into the topic at hand, let me explain what Dana White intends to do by putting Robbie Lawler in the octagon with Johny Hendricks. Dana White wants to let the fans know that the UFC welterweight division can still be exciting without Georges St. Pierre. What better way to prove that than to pit two of the most exciting knockout artists in the division against each other for the vacant title? Carlos Condit already showed the world what he would do if he were to fight for a vacant championship during his bout against Nick Diaz for the UFC Interim Welterweight Title. He would hit and run for five rounds. Albeit strategic, it’s not the excitement Dana White or the rest of the world is looking for. – Jon Kirschner

FICTION – Absolutely not. Condit has only lost two fights in the last four years (one to Georges St. Pierre, and the other to Johny Hendricks). Let me tell you one thing— I may be in the minority here but I honestly thought Condit deserved to win against Hendricks. Condit landed more significant strikes in every round and basically stifled Hendricks’ top game. Hendricks did get 12 takedowns, but he did little with them. ‘The Natural Born Killer’ was also close to defeating St. Pierre in their fight. Robbie Lawler is on a roll, but the level of competition he has been facing is incomparable to Condit’s. I think we all know once he works on his takedown defense, Condit will be the king of the welterweight division… At least until St. Pierre makes his inevitable return. – Derek Langhorn

OUT of BOUNDS: Are figures like Dana White and Joe Rogan out of line for talking about certain fighters and when they need to retire?

Both Dana and Joe are both very passionate and opinionated guys. Some of the MMA community like hearing their take on controversial subjects and some people just think they’re loudmouths. We’re all part of a sport that is often riddled with controversies; Controversial decisions, fights being cancelled, and fighter choices outside of the cage are all hot topics, and we all have our opinions.  While Dana is the president of the UFC and Joe is a commentator, they’re fans just like the rest of us and sometimes we forget that. They have every right to sound off on controversial topics just like the rest of us.

That being said, sometimes it does go overboard. Dana often uses colorful language when he’s mad and some people think it’s unprofessional. Do I think Dana and Joe should give their opinions on controversial topics? Yes I do. Do I think they have the right to criticize fighters? Yes I do. – Evan Stoumbelis The title of “Best UFC Champion Of All Time” will always be subjective. There are just too many variables to consider, such as weight classes, competition, how long a fighter competed, how badly they dominated their opponent, how many close calls they had (or didn’t have)… it’s a very tough decision to make, and an even tougher one to get any agreement on.

With that being said, certain fighters always seem to make the list: Anderson Silva, Chuck Liddell, Georges St-Pierre, and Jon Jones. And to me, GSP gets the nod.

“Rush” is simply the most well-rounded champion we’ve seen in the history of the sport. He’s beaten men with just his jab, he’s out-wrestled Division 1 champions, he’s submitted some of the best in the world, and he will turn even the smallest weakness into an overwhelming advantage for himself. His competition has consistently been some of the toughest opposition ever faced by a champion, and while facing that opposition he’s managed to set an insane amount of records (like winning 33 rounds in a row). He has no weaknesses to speak of, and has looked comfortable no matter where the fight goes.

It’s sad, to see him retire. A fighter with his talent and skill comes around once in a lifetime, and for him to be done at such an early age would be a real travesty. I’m going to keep my fingers crossed that he gets the rest he needs, during this hiatus, and comes back stronger than ever, ready to reclaim his belt. But if he does stay retired, he goes out as the greatest champion that we’ve seen in the UFC. – Jim Chadwick

Do YOU think GSP is the greatest champion of all time? Let us know in the comments section or tweet us @bjpenndotcom!