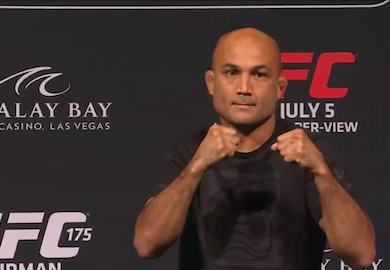 The UFC held a special press conference featuring fighters from UFC 175 and TUF 19. The media and some fans had the opportunity to asks the likes of Chael Sonnen, Wanderlei Silva, Chris Weidman, Ronda Rousey, Alexis Davis, Lyoto Machida and BJ Penn questions.

During the press conference Penn answered questions ranging from his reasons for returning to his drop to 145.

Penn was asked how everything came about and how he landed the fight with Frankie Edgar. Here’s what he had to say:

“One day me and Dana were talking and you know, I wanted to come back and try another fight with Frankie Edgar again. I was talking to Dana, I was trying to see what fights were out there. Dana said, “Why do you want to come back?” I said, “I want to take another shot at Frankie so I’ll fight a couple of fights to get to him” and Dana said, “You know there might be an opening now but its at a lower weight, so you make that decision and give me a call back.” Before I hung up the phone I knew the answer was going to be yes. So I’m just real excited with how all this turned out.”

Penn was of course asked about the weight cut and how he feels dropping to 145, a weight he has yet to fight at in his career.

“I feel good, I feel skinny, I feel like Bruce Lee.”

Penn is coming out of retirement and when asked whether he would be fighting again after his fight with Edgar he had this to say.

In what was one of the highlights of the press conference, Penn was asked how he wanted to leave the sport and what he wanted people to say about him after he’s gone. While Penn gave his answer the fans erupted in applause.

“I want everybody to know that I always came out here and I always gave it the best shot I had, whether it went my way or not that night. Fighting’s my whole life and you know, the UFC’s my whole life, Dana, everything. Just remember me, I was here.”

Penn was asked about his training in Brazil and he replied by saying that he is scheduled to go, but the recent situation with Shogun being robbed has added some unforeseen distractions.

“We have our tickets, everything, we’re ready we’re set to go. I am getting a little bit of flack from my family, at this point now, from my wife and my mother about going down there with everything that’s been happening with Shogun and everybody. So they try to talk to me, but you know, I’m just trying to keep myself as stress free as possible. We’ve got a couple of big decisions to make over these next three days.”

The next question was about his return and whether he would have come out of retirement for any other fight.

“If Dana told me to come to 145 and fight any of these other people, there’s no way I would have done it. No way.”

A follow-up to that question was if he would have come back for any fight, no matter the division, or if it was Edgar or nothing.

“Yeah that’s kind of how it starts and then we’ll just see where this whole thing goes.”

Penn was then asked why a fight with Frankie Edgar was so important to him. Penn had some fun with the question, but then gave some brief thoughts on his opponent.

“Hmm, let me think. Why is Frankie Edgar important to BJ Penn? I had a good run going at 155, Frankie came in and you know, one thing about Frankie, I say that he’s one of the best ever in the UFC and I believe that’s half the battle, just knowing what you’re going up against. Getting the opportunity to coach against him, I realized that he’s one of the most competitive people, he’s not one of those ‘I’m angry, I’m mad all the time, I want to kick everybody’s butt’ he’s just a really competitive person and I really believe that’s going to help me coming into this. I’ve got a very formidable opponent standing on the other side of the ring.”