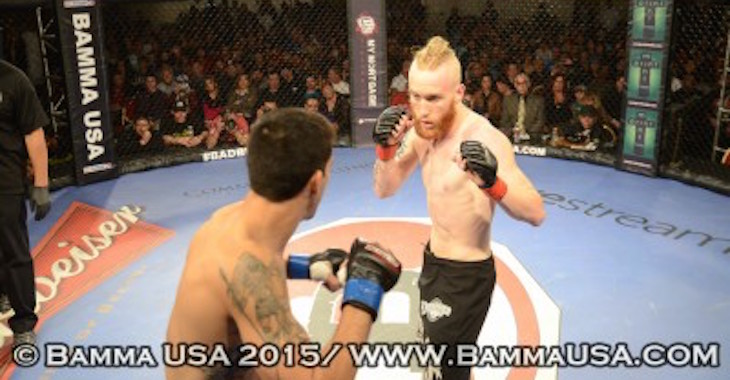 Brandon Morris and Chris Saunders will clash in a lightweight title eliminator in the main event of BAMMA USA – Badbeat 16, which streams live on Go Fight Live tomorrow, Friday, June 26.

I had the chance to talk with Morris about his upcoming fight.  We discussed what it’s like training with MMA legend Dan Henderson, how he finds balance, how quickly he’s on the brink of getting a title shot, how having a child has helped him forge a must win mindset and how he’s already been given two nicknames,  “Young Money” and “Redrum.”

Keith Harmon:  How did you get into MMA?

Brandon Morris:  I wrestled for ten years before I had my first amateur fight.  So one thing lead to another and then I started to work with Team Quest.

KH:  You mentioned in a prior interview that you sometimes work until 3 a.m.  How do you find the balance between such a late work schedule and the time to train?

BM:  That is another miracle I have going on.  My wife lets me sleep in a little bit before practice.  Then I go to practice and go to work right after.  You have to make sacrifices, and she knows that and so do I.

KH:  What do you do for your regular job?

BM:  I work at one of the Amazon warehouses.

KH:  Your last fight was your first fight at lightweight.  Now you’re on the cusp of a title shot.  Did you think that would happen this quickly?

BM:  I honestly didn’t think it would happen this quickly.  I didn’t even think I could make 155 until my last fight when I made 155.  But I’m glad it’s happening this quickly.

I’ve been working out every day for the past couple years trying to improve my stuff, and I’m excited to show the world what I got.

KH:  Many fighters are fighting above or below their natural weight class.  Do you feel that 155 is your permanent home?

BM:  For now.  All my other fights at amateur were at 170.  And when I got to the professional level you have day before weigh-ins.  The four guys I fought at 170 were walking around at 200 pounds the day of the fight.  So I dropped down to 155 and I’m feeling pretty good.

KH:  You said your wife has helped you tremendously and your dad told you about your Inside MMA highlight in which Bas Rutten had mentioned you.  How has your family helped you with your MMA career?

BM:  My wife is everything. She cooks my food for me.  She tells me what I can and can’t eat.  I may want to sneak a cookie, but she keeps me on point, and doesn’t let me do that.

My family loves MMA.  My mom loves it until I get into the cage.  She can’t watch.  She usually goes to sleep when I’m about to fight, and she doesn’t watch it until the next day.

KH:  That’s pretty interesting that she can turn it off and watch later.

KH:  When you’re cutting weight, is there any food that you crave?  You mentioned cookies, or is it fast food?

BM:  My big thing that I would love to have when I cut weight is a 7-11 Slurpee and a pizza.  I’m not talking about a regular size Slurpee.  I want to fill up a 64 ounce cup to the top and (eat) a large pizza.

KH:  You train with Dan Henderson’s team, Team Quest.  Were you intimated or nervous at all when you first started training there?

BM:  When I first started there, I  actually drove around the building twice before I had the courage to go in the gym.  Just because it’s Dan Henderson.  But it’s all cool, when I started training there, and now we’re a family.

KH:  You’re fighting Chris Saunders, a UFC and Bellator veteran.  Any thoughts about him as an opponent?

BM:  I know he likes to strike and stand and bang, which is what I like to do.  He’s going to be my toughest and biggest fight to date.  As for him having been in the UFC, I’m not really worried about that.  I train with guys who currently fight in the UFC.  Until he got hurt, I trained with Tarec Saffiedine, who was the Strikeforce welterweight champion and, every now and then, I spar with Dan Henderson.

KH:  How has Dan helped you?

BM:  Every time I spar with him, I always ask if I did certain techniques correctly.  Or if I did what he needed me to do.  He’s always giving me feedback, and he has that wise mentality that has helped me out a lot.

KH: Before  his last fight, a lot of people counted him out and, then he went out and won it in under 30 seconds.

BM:  I actually got a chance to watch that fight.  I went on my lunch and thought I’d be able to see the first and maybe second round, and then it was over and I was like hell yeah!

KH:  You have a seven month old.  How has being a father changed your fighting life?

BM:  She’s my motivation.  Before, it was just me and my wife.  She’s working too, and I was working my other job and fighting.  Now that I have my daughter, my mindset has changed, and I can’t lose.  I have to win.

KH:  You’ve had a couple of nicknames.  First it was ‘Young Money’ and then it was ‘Redrum.’  What’s the story behind the two?

BM:  My first nickname was given to me before a fight.  One of my training partners, Richie Whitman gave it to me.  I was buying a Gatorade at the snack bar and I pulled out a bunch of one dollar bills and he started calling me ‘Young Money’ and that stuck.

My wife didn’t like that nickname.  And then, one of my coaches said he’d come up with a good one.  Then one day before the fight, he came up to me and said, ‘I have your new nickname – Redrum.’  I had never seen The Shining, so I thought it had to do with my red beard.  When he told me about the movie, I was cool with that.