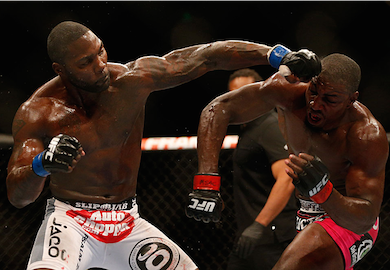 “I have a ton of respect for him [Jon Jones]. He is the champ, but I also know that I have to put in the work to be a real contender. Just because I have this win tonight doesn’t make me, in my opinion, a contender. So I am just taking it one fight at a time.”

Following UFC 172, the world is talking about two men and two men only.

In the co-main event, last Saturday, ‘Rumble’ took out the number 4 ranked Phil Davis with ease. But during the post-fight press conference, Johnson stayed humble and according to his words, doesn’t yet consider himself a contender in the division.