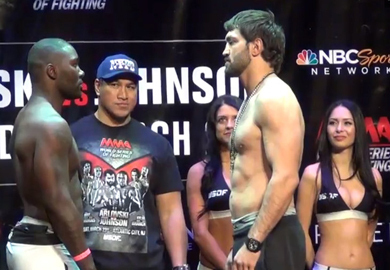 Round 1: Both heavyweight strikers came out strong. Johnson stayed inside while Arlovski circled the outside of the cage. Johnson showed a diverse and frequent series of strikes with some of them landing flush but none doing real damage. Johnson was able to hold Arlovski against the cage but it was broken up by the referee. They were restarted and immediately began to swing.

Another clinch was broken up with twenty seconds left in the round. Upon the restart, both men traded with Johnson landing a big punch that dropped Arlovski. Johnson tried to finish and thought he had, yet it was cut off by the bell for the end of round one.

Johnson senses that Arlovski was hurt going in to round 2 and tried to take full advantage of it, letting his punches and kicks go. Arlovski stayed put, though, and landed some nice shots of his own. An uppercut from Arlovski stunned Johnson, followed by a flush knee. They didn’t slow up, throwing knockout shots that found no home. Johnson’s nose was now bloodied in the first visible signs of damage in the fight.

They engaged in another clinch only to be separated by an inadvertent Arlovski knee.

Johnson again started to unleash, catching Arlovski with two good shots before shooting in for a takedown with a minute remaining in the second round. Arlovski fought to his feet and maintained a strong sprawl to avoid being placed back on the mat. Arlovski started raining down two-handed hammer fists to Johnson’s back and ended the round throwing hooks from the sprawl to Johnson’s body.

More brutality as Johnson and Arlovski swung with whatever power they had left, with both getting hit. Johnson landed a nice combination of strikes and shot in for an unsuccessful takedown. Arlovski kept his tall stance and worked his jab while Johnson headhunted. They initiated another clinch after a failed spinning back kick to the body, from Arlovski, missed its target.

Again a separation and hard exchange, again a clinch.

Both men seemed desperate to impress the judges late in the round with Johnson working for takedowns and Arlovski swinging away any chance he had.

For full results from the World Series of Fighting 2 event and the latest MMA news visit BJPENN.com