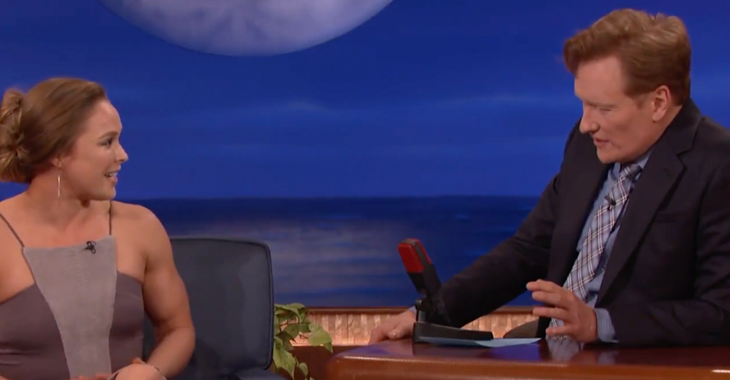 Former UFC women’s bantamweight champion Ronda Rousey has a chance to get back the belt in her first fight since losing for the first time in her professional mixed martial arts fight.

Rousey is set to challenge current UFC women’s bantamweight champion Amanda Nunes in her first title defense since winning the belt from Miesha Tate at UFC 200.

With Rousey’s last fight taking place over a year ago back in November of 2015, both fans and critics of “Rowdy” Ronda are waiting to see how she performs in her first fight since being knocked out by Holly Holm in a shocking upset.

Rousey appeared on Conan O’Brien’s show on Wednesday night and appears to be in terrific shape as the two talked about the professional mixed martial arts fighter’s love of video games.

“Yeah, I was a socially awkward kid, so I been playing Pokemon for like 19 years,” Rousey said to O’Brien. “That’s actually how me and Vin Diesel became friends, was I was on Fast 7, his sister found out that I play World of War Craft and so every night after filming we would go over to his place and set up computers on like other sides of the room and we were like, ‘we’re gonna go to this dungeon and were gonna do this,'” said Rousey of their gaming tactics.

Rousey added that with her incognito status playing under a gaming profile, she is able to get real interactions with people that aren’t acting a certain way because of who she is.

“I just like talking to people online,” Rousey stated. “They have no clue who I am and just like you know, be able to have genuine interactions with people and they’re just nice just because and I like it.”

How do you see Ronda Rousey doing in her comeback championship title fight against Amanda Nunes taking place at UFC 207 on December 10? Give us your prediction in the comment section on how and when the fight ends!