UFC commentator Joe Rogan has stated that he personally does not think it’s a good idea to interview fighters in the Octagon after they just had been knocked out. However, he went against his own belief following the UFC 214 main event on Saturday by interviewing Daniel Cormier in the Octagon after he was knocked out by Jon Jones in their title fight. Rogan made a public apology to Cormier and upset fans on social media following the fights and stated that it was entirely his fault and didn’t even realize he was screwing up until it happened.

Rogan then took some time to explain the situation with Eddie Bravo on his Joe Rogan Experience podcast.

“I don’t think it’s fair,” Rogan said about interviewing fighters who have just been knocked out cold. “So, it was my idea to stop doing this and the UFC agreed. So, it’s not like they said we gotta stop doing and I violated, I violated my own idea.”

Rogan went on to explain the experience of watching cageside of how violent the end of the fight was. 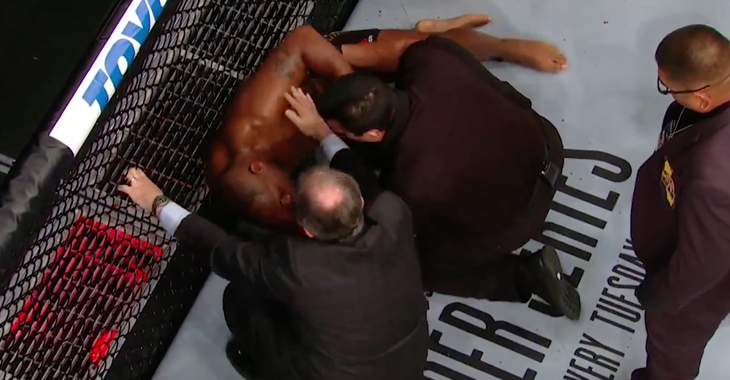 “It was intense and also I felt like there was a couple shots too many. So I remember being stunned,” said Rogan. “I’m a big fan of Jon Jones but I’m also a big fan of Daniel and I’m a big fan of both of them. I know they don’t like each other but I like both of them. I like them independently. I just can’t help the fact that they’re enemies. But, I love hanging out with Jon and I love hanging out with Daniel. I love doing commentary with Daniel. I love that guy. So, I would never do anything to make him look bad.

“You gotta realize when a KO like that happens in a world championship fight and you’re standing in the Octagon, you’re surrounded by all these people screaming and cheering. The f*cking noise is so loud. It’s hard to figure out what the f*ck is happening.”

Rogan then went on to explain the moment he interviewed Cormier. 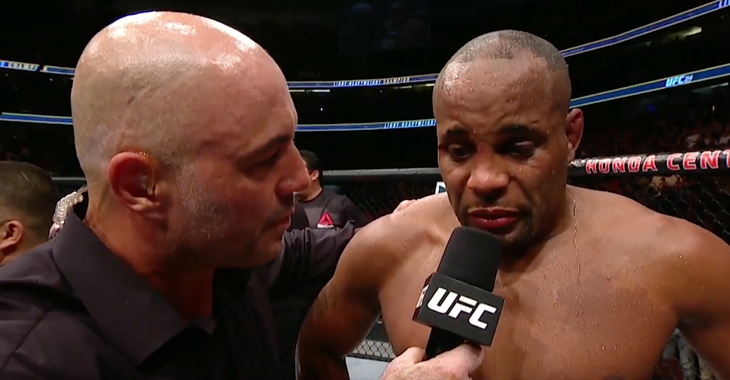 “I went to go talk to him and literally as I’m going to talk to him, he’s turning to me and I have the microphone. I’m like, why am I interviewing him after he got knocked out? What the f*ck is wrong with me? I didn’t even realize what I was doing. I was in shock almost. I went on instinct.”

Joe Rogan went on to say that him interviewing Cormier really haunted him after it took place. No one from the UFC questioned his decision to interview Cormier and Rogan said he was really just questioning himself on why he did it.

“It was just me thinking, ‘Why did I do that? Why did I interview him?’ I shouldn’t have interviewed him even though we used to do it for every fight. It was the right move to stop doing it and ironically it was my idea.”