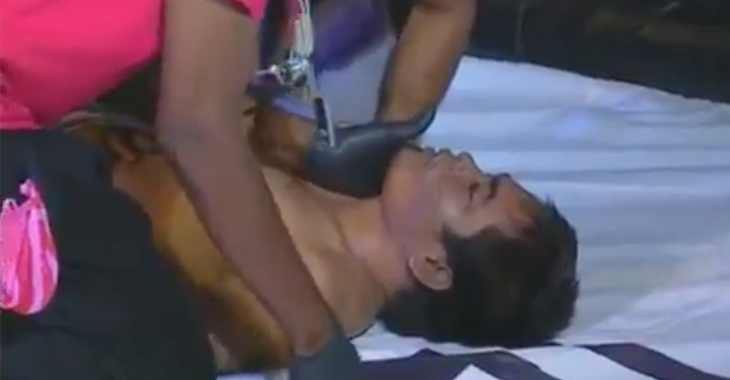 Being a referee in a mixed martial arts competition is not an easy job that comes with a lot of criticism.

Refs often get scrutinized if they stop a fight in what some may view as either too early or too late. Under certain circumstances, it is tough for the referee to make the best judgment all in the heat of the moment while at other times viewers have questioned the officiating calls in utter disbelief.

Here, we take a look at a frightening incident from The UGB13 MMA: Foreign Invasion featherweight title between Ahmed Mujtaba and Rodian Menchaves that took place earlier this year. Mujtaba and Menchaves battled in the first round of their title fight where Mujtaba was able to establish his ground game against his Filipino opponent. Mujtaba attempted to finish Menchaves with a guillotine and transitioned to the mount position. The fighter from Pakistan landed some big shots from the mount position and was eventually able to get the back of Menchaves and attacked with a rear-naked choke.

So a guy almost died cause of filipino Steve Mazzagati pic.twitter.com/k3NWa4QIn6

As the two fighters battled for position, referee Arnel Lomibao looked on from different angles. The referee looked to see if Menchaves was still in the fight as the fighter’s arm eventually was stuck under his body after being flattened out with Mujtaba on his back. What are your thoughts on the refereeing in the UGB MMA title fight between Ahmed Mujtaba and Rodian Menchaves? Let us know in the comment section!