From low blows to eye pokes, accidents happen from time-to-time in mixed martial arts. Another type of accident that has happened more than once in MMA is when a fighter defecates in the middle of competition.

Most recently, UFC strawweight Justine Kish admitted that “shit happens” after brown stains appeared on the Octagon canvas in her fight against Felice Herrig at UFC Fight Night 112. Although Kish owned up to her accident, Herrig feels bad that the moment that would be very embarrassing for many is getting so much buzz. 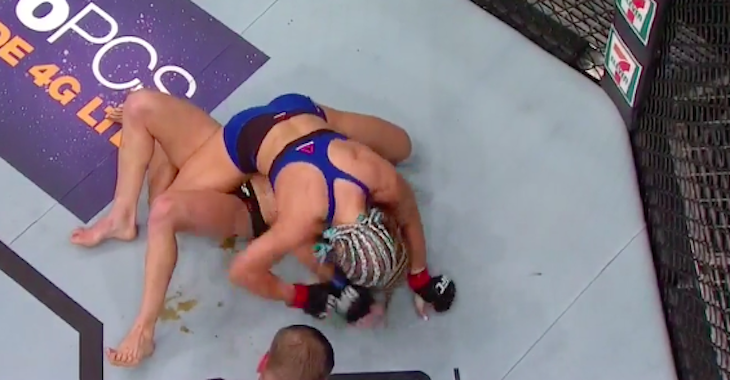 “I feel bad for Justine, I really do. It’s hard to even talk about it because I don’t want her to keep re-living it, like, ‘every time Felice does an interview they’re going to keep bringing it up.’ But it didn’t faze me, I think when you’re a fighter, you just have tunnel vision because you have a job to do.”

When asked if she knew the accident happened during their fight Herrig said she knew something strange had happened.

“I mean, I didn’t really know exactly, but I smelled something.”

Herrig was asked if she was thrown off by the accident and if it had any effect on her in the fight.

“No [it didn’t throw me off],” Herrig said. “You know, the adrenaline, like people can break their hands during a fight or get hit so hard, but you have that adrenaline. … I’ve found a way to be calm under pressure.”

While many people would have reacted differently in the situation, Herrig says she was just overcome with happiness with picking up another win in the Octagon. With her win over Kish, Herrig shot up three spots in the UFC rankings finding herself now sitting at the #10 spot.