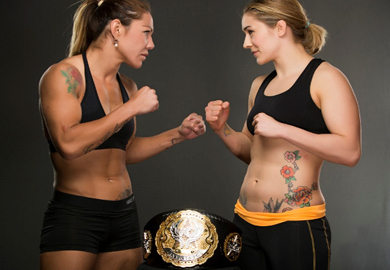 The 25-year-old Esparza, a winner of four consecutive bouts, became the first strawweight champion in Invicta FC history by stopping Lynn Alvarez with a barrage of punches in the first round (2:53) of their matchup in Kansas City, Kan. on Oct. 6, 2012. Esparza, who has claimed six of her nine professional career victories by way of (T)KO or submission, is unbeaten in her three Invicta FC starts to date.

Hamasaki, a 31-year-old submission specialist, has been an unsolvable puzzle in action, thus far. After reeling off victories in her first seven stars in Japan, she made her debut in the U.S. at Invicta FC 2 last July 28, submitting Lacey Schuckman in the third round (4:45) of action with an armbar. Hamasaki recorded her latest conquest in on Dec. 15, a unanimous decision over Emi Fujino in a JEWELS-promoted contest in Japan.

Undefeated, fast-rising stars Joanne Calderwood (6-0) of Glasgow, Scotland and Claudia Gadelha (9-0) of Mossoro, Rio Grande Do Norte Brazil will put their perfect records on the line against each other in a flyweight (125 pounds) bout.