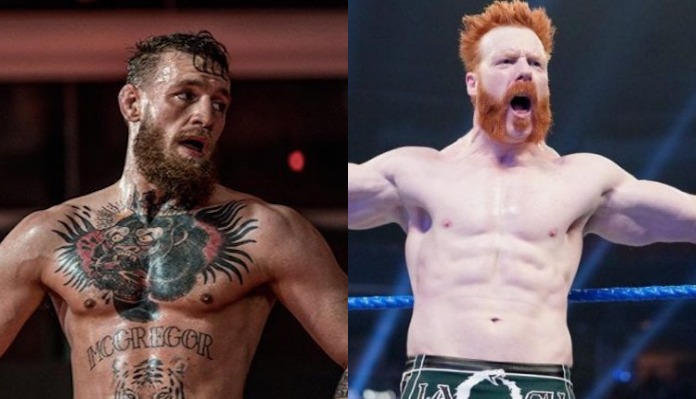 WWE star Sheamus believes his fellow Irishman Conor McGregor will ultimately migrate to pro wrestling, it’s only a question of when.

McGregor returned from a year-long layoff at UFC 257 last Saturday, succumbing to strikes for the first time in his mixed martial arts career opposite Dustin Poirier.

After that jarring loss, McGregor’s future is murky to say the least. Sheamus, however, believes the former two-division UFC champion will soon try his hand at professional wrestling.

“He’s teased (coming to WWE) a couple of times,” Sheamus said during an interview with Stephanie Chase of Digital Spy (via The Score). “He’s still staying active, he’s a lad who’s won belts, he’s done a lot, so I think he’s that type of person who’s always trying to try his hand at something different.

“I think WWE would suit him down to the ground,” Sheamus added. “You know, we’ve had a lot of people come in and out, (Floyd) Mayweather came in, a lot of celebrities have come in, a lot of sports people. So I don’t think anyone would raise eyebrows if he came in to WWE. I don’t think it’s if, I think it’s a matter of when to be honest.”

Sheamus, unsurprisingly, added that he’d welcome a pro wrestling match with McGregor if the opportunity ever arises.

“If he wants to come in there with me, that’s grand. He might get the fight of his life there, he might get couple of slaps he’s not used to,” Sheamus said. “But that’s what it’s all about, getting in there and seeing a different type of environment.”

With his loss to Dustin Poirier, who he knocked out in the featherweight division in 2014, McGregor is now 22-5 in MMA. In his second most recent fight, he picked up a 40-second TKO win over fan favorite veteran Donald “Cowboy” Cerrone.

Do you think Conor McGregor is destined for a WWE move?