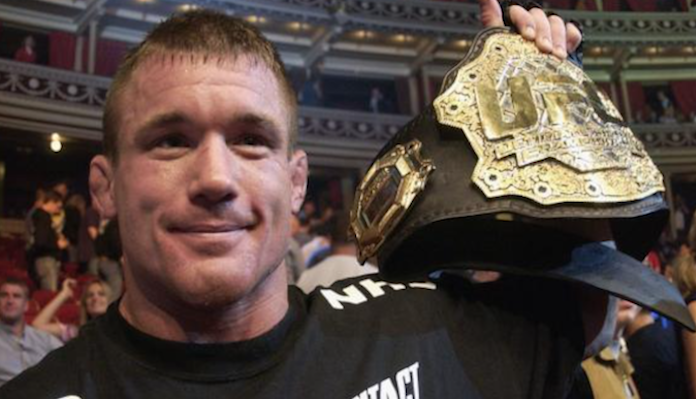 Former UFC welterweight champion Matt Hughes, who was left with severe brain injury in a nearly-fatal 2017 accident, has reportedly been hit with restraining orders from both his wife Audra and his twin brother Mark amid allegations of domestic violence.

TMZ’s report alleges that Hughes’ wife Audra filed for a restraining order against the former champion in December of 2018, after several incidents.

One is reported to have occured in 2017, when Matt Hughes got allegedly violent with her in the shower after she refused to give him his truck keys on account of his brain injury. Hughes allegedly choked her and smashed her head into the wall of the shower.

The report continued to detail a second incident, which is said to have occurred in 2018, when Hughes is alleged to have gotten violent after she accused him of texting other women. During this second incident, Hughes allegedly asked for the code to his gun vault and threatened to shoot her.

It was after this second incident that Audra Hughes filed for a restraining order. Matt Hughes was ordered by a judge to stay 500 feet away from her.

According to an in-depth report from MMAjunkie, Hughes’ wife has also filed for divorce.

This development reportedly stems from a disagreement over the ownership of a tractor, which is said to have occurred in October of 2018. According to TMZ’s report, Matt Hughes got physical with Mark’s 15-year-old son, who was driving the tractor at the time. Hughes allegedly claimed the tractor belonged to him. The report alleges that, one week later, Mark discovered the tractor drenched in gasoline. He believes this was the result of an attempt by Matt to destroy it.

Hughes’ 2017 accident left him unresponsive for a period, but he ultimately recovered enough to leave the hospital, and even made an appearance at UFC Fight Night 124 in St. Louis in January of 2018. Stay tuned for further updates on this unfortunate Matt Hughes situation as they emerge.