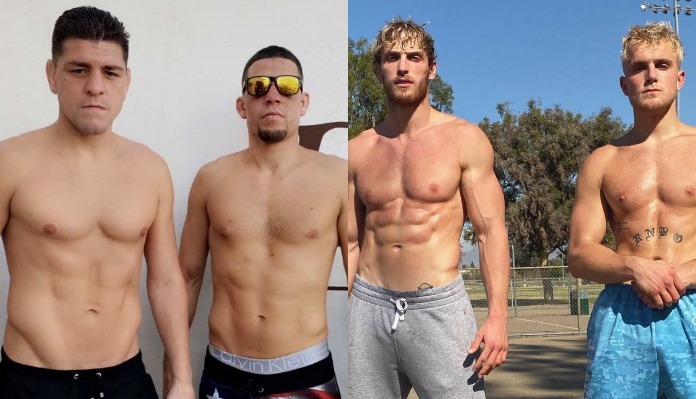 The Paul bros have become the talk of the combat sports world after Logan landed himself an exhibition boxing match with Floyd Mayweather Jr. and Jake knocked out former NBA star Nate Robinson on the Mike Tyson vs. Roy Jones Jr. undercard, and neither one is letting their time in the limelight go to waste. Jake has become a particularly loud voice inside the combat sports bubble, calling out a host of top fighters like Conor McGregor, Dillon Danis, Jorge Masvidal and Ben Askren.

Jake’s repeated callouts of these stars ultimately got a response from Nate Diaz. From there, it was just a matter of time before people started talking about a potential boxing card involving the Diaz bros and the Paul bros.

Yes. They can get paid for it. Or the Diaz will do it for free. https://t.co/xUylfEDn1G

Jake Paul is 2-0 as a pro boxer. Logan Paul, on the other hand, is 0-1, having lost his lone pro bout, with fellow YouTuber KSI, by decision.

Do you think the world needs a Diaz bros vs. Paul bros boxing card?