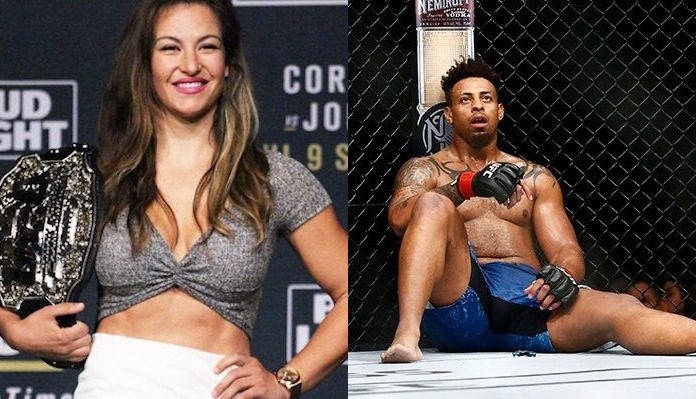 Greg Hardy recently said that he believes he could be the greatest combat sports heavyweight of all-time.

Those comments did not sit well with former UFC bantamweight champion Miesha Tate.

Tate went on MMA Tonight on Sirius XM and blasted the former NFL star for his arrogance.

“Look, I appreciate that you’re enthusiastic about your career and what you have ahead of you, but I don’t think that’s possible. You look at Daniel Cormier who has been doing this the majority of his life, and he has accomplished so much in that time because it’s the single sport that he really has made his career out of. It’s a pretty asinine statement.”

Greg Hardy is currently 4-1 as an MMA fighter, winning his most recent bout via first round knockout. Hardy is set to make his third Octagon appearance on Saturday. With “Prince of War” being so young into his career, and him not fighting ranked opponents, Tate says his GOAT comments are ridiculous.

“Even look at the quality of opponents who he has fought. I think they are fair to his skill set and his experience in the sport. But they are nowhere near the level of a Daniel Cormier, Stipe Miocic, Francis Ngannou. They’re not on the same playing field. He’s got all this confidence because, yeah, he’s knocking people out, and great. But just pump the breaks a little, because I guarantee you when get into that upper echelon, you’re not gonna be putting people to sleep like that. Because it’s a different level in competition.

“So anyways, I know he has his next bout coming up, so it’s one bout at a time, and he’s got to focus on what’s the next step ahead, not being the greatest heavyweight of all time because, to me, that’s ridiculous.”

Do you agree with Miesha Tate in regards to Greg Hardy’s comments? Sound off in the comment section, PENN Nation!