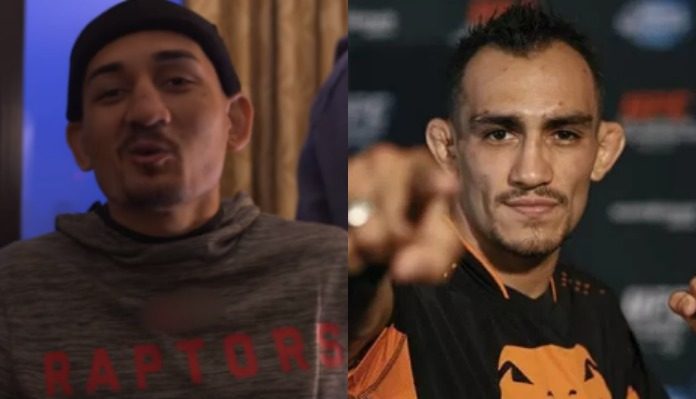 With UFC lightweight champion Khabib Nurmagomedov currently suspended — and potentially sitting out until November — the UFC lightweight contendership picture is a little unclear. If a recent Tweet from UFC featherweight champ Max Holloway is to be taken at face value, it could get a little bit clearer at UFC 236.

In his Tweet, the featherweight champion shared a screenshot of the Wikipedia page for UFC 236, which goes down on April 13 in a yet undetermined setting. The page, whether it’s accurate or not, says the card could be headlined by an interim lightweight title fight between Holloway and Ferguson.

“Tony Ferguson is the type of guy to copy my back tattoo then tell me I’ve just been blessed,” Holloway wrote in the caption for this photo, referencing his and Ferguson’s similar back tattoos.

Tony Ferguson and Max Holloway are the owners of two of the most impressive win-streaks in MMA at present.

Stay tuned for more updates on this potential Holloway vs. Ferguson interim title fight as they emerge.