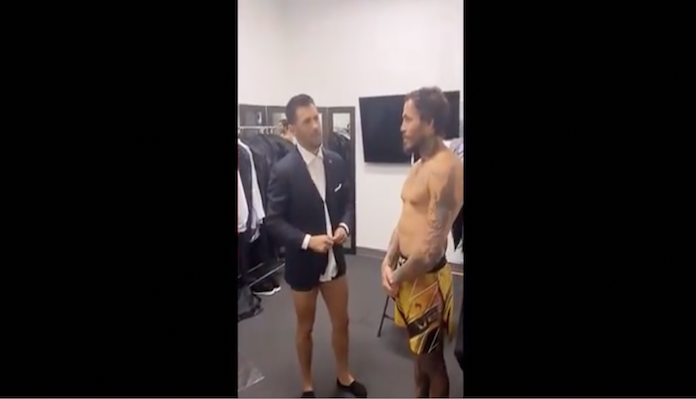 Vera defeated Davey Grant via unanimous decision in the “Fight of the Night” at UFC Vegas 29 on Saturday night. After losing the first round to Grant, who was busier with his striking, Vera really came on in the second and third rounds with his work from the clinch especially, as he cut open Grant with elbows that sliced the Brit’s face open. Although Grant was tough enough to survive until the final bell, Vera did all the damage in the fight and deserved to earn the unanimous decision on the judges’ scorecards following the bout.

Following the victory, Vera suggested that he next fight Cruz, who called his fight against Grant Octagon-side along with UFC commentators Michael Bisping and Jon Anik. According to Vera, the UFC tried to book a fight between him and Cruz last year, but Cruz wasn’t interested in it. Now that Vera has beaten Grant to get back into the win column, and with Cruz coming off of a split decision win over Casey Kenney in his last fight, Vera believes that a fight with him and Cruz makes sense. And though Cruz initially appeared to turn down the fight during the broadcast, Vera made sure to find him backstage afterward.

Following his win over Grant at UFC Vegas 29, Vera found Cruz backstage and talked to him about a potential fight while Bisping filmed it. Only Cruz was in the dressing room getting changed and so Vera was calling him out while he had his pants at his ankles, which is likely a first when it comes to calling someone out (video via MMAMania).

Do you want the UFC to book this bantamweight bout between Marlon Vera and Dominick Cruz?