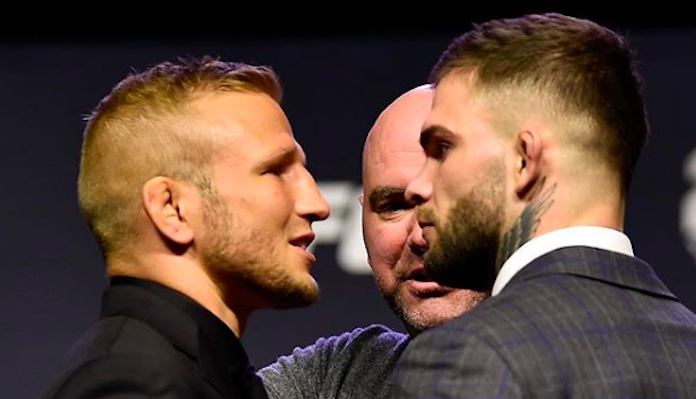 At UFC 235 in March, the former bantamweight champion Cody Garbrandt went to war with Brazil’s rising contender, Pedro Munhoz. Unfortunately for the Team Alpha Male staple, he would suffer his third consecutive defeat via knockout.

Of course, it’s never a fighter’s desire to take damage, especially in the form of a knockout. So when it comes to getting back to fighting, health and timing are critical.

With the UFC making a return to Sacramento in July, the home of Garbrandt’s gym, his manager Ali Abdelaziz recently informed MMA Junkie Radio that the UFC was looking to book his fighter for the event. However, the Dominance MMA agency head felt it would be too soon for the former champion to return to action and stated he hopes for a November or October return to action.

“You know what the problem is with Cody? He’s too much of a fighter,” Abdelaziz said. “If Cody fought the way [he did in the] Dominick Cruz fight, he’s going to be very hard to beat. But he’s got so much on his shoulder – a chip on his shoulders. If you punch him, he wants to kill you, he wants to eat your heart out. But that’s just Cody, love him or hate him.”

Since the fight with Munhoz, the 135-pound bantamweight class got flipped upside down in April as the champion, TJ Dillashaw, would test positive for the banned substance EPO. Therefore resulting in a two-year suspension and his relinquishing of the title. At UFC 238 on June 8, flyweight champion, Henry Cejudo will face off with top contender, Marlon Moraes for the vacant crown.

Despite testing positive for the substance in another test prior to what got him suspended, Dillashaw’s test results from his two meetings with Cody Garbrandt did not come back positive. Regardless, Abdelaziz believes that all of Dillashaw’s UFC wins should be now overturned.

“If you’re an Olympic gold medalist, and you get caught with steroids, they take all your medals away – every medal you ever won,” he said. “TJ Dillashaw, all his wins in the UFC should be taken away. We told USADA about this… they ignored it.”

Dillashaw will be eligible to return to action in January 2021.