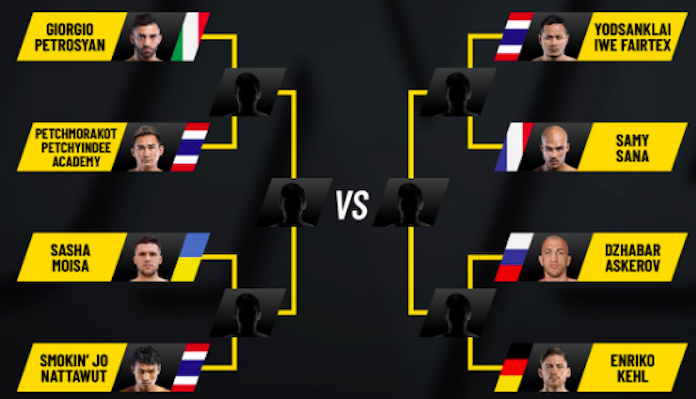 There was already ample reason to be excited for the ONE Kickboxing World Grand Prix, which begins this Friday at ONE: Enter The Dragon in Singapore. Yet at a pre-fight press conference on Tuesday, ONE Championship Chairman and CEO Chatri Sityodtong added even more spice to this massive kickboxing tournament.

He says the winner will receive a $1 million prize.

“Never before have eight of the greatest kickboxers descended upon a single place [like this] to see who’s the best. In this case, Singapore gets to see the kickoff of the ONE Featherweight World Grand Prix,” Sityodtong said (transcript via Onefc.com).

“I would also like to announce – and it’s a surprise to eight of the fighters here – the winner gets US$1 million dollars. More than that, he will have the bragging rights to call himself the best striker in the world.”

All four quarterfinal bouts of the ONE Kickboxing World Grand Prix will occur at Friday’s Enter The Dragon card, and as Chatri Sityodtong suggests, the winner of this tournament can arguably be called the best striker in the world.

8 of the world's best strikers compete for US$1m in the single greatest kickboxing world grand prix in history. Every single fight is World Champion vs World Champion. And it all begins this Friday May 17 in Singapore!

Welcome to ONE: Enter The Dragon! LET'S GOOOOO!!! #WeAreONE pic.twitter.com/ck6Y2PXJd6

The favorites to win this tournament are undeniably Armenian-Italian phenom Giorgio “The Doctor” Petrosyan and Muay Thai specialist Yodsanklai IWE Fairtex, who have seemingly been on a collision course since signing ONE Championship. Yet the tournament also features talented dark horses like Smokin’ Jo Nattawut and Petchmorakot Petchyindee Academy. All eight fighters in the tournament are obviously thrilled with the prospect of earning a life-changing $1 million payday — though most also maintain their focus is on the fights ahead, not the prize itself.

“Right now I’m not thinking about the tournament. I’m only thinking about my opponent. I will see you on Friday,” Petrosyan said at the press conference.

“It’s amazing that you have eight of the best strikers in the world coming together,” Yodsanklai added. “I believe that every single person in the World Grand Prix has a chance to win the whole thing, so I hope to perform to my very best abilities.”

What do you think of this announcement from Chatri Sityodtong?