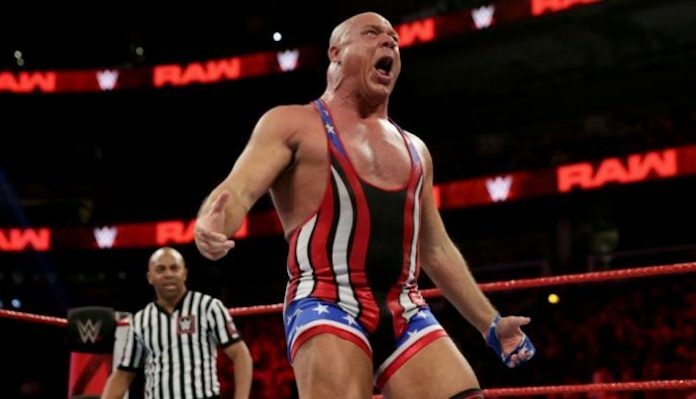 WWE Hall of Famer Kurt Angle says he received an offer from the Ultimate Fighting Championship, but turned it down.

Angle, an Olympic gold medalist in wrestling, achieved superstardom as a member of the WWE roster. However, he says he had the opportunity to try his hand at mixed martial arts in the UFC.

Speaking on the Pat McAfee Show on Wednesday, Angle revealed that he was in talks with the UFC in 1997, but the promotion didn’t offer enough money to justify to the massive risks of competing in the Octagon.

"It never happened & I'm glad I didn't because breaking my neck 5 times total.. I did a lot of damage" #PatMcAfeeShowLIVE pic.twitter.com/ys4tzphOWJ

“It’s still good money but it’s not great money for putting your body on the line like that. You’re risking concussions and injuries, and it’s just too much,” Angle added. “I declined the offer.

“This is before Dana White purchased the company. UFC didn’t explode until after I had gotten into WWE. That was around 2000 or 2001. I came to WWE in ‘99 and, being in there, I had a great rookie year. One of the best ever. And I just felt like I didn’t want to start over again.”

Angle says he was also in talks with the UFC in 2006, after he parted ways with WWE. However, he signed with TNA instead.

“I even talked to Dana White when I left the WWE in 2006. He flew me to Las Vegas and he’s a great guy,” Angle said. “He treated me very well.

“He told me that he wanted me to do one fight and he also wanted me to show up at every pay-per-view, wave in the crowd and be there,” Angle added. “It was a lucrative deal but I’d just signed with TNA – IMPACT Wrestling. I asked Dana if I could do both, but he said I couldn’t do both, you had to do one or the other.”

While Angle clearly came close to a move to MMA, he says he’s glad it never happened due to the physical toll it likely would have taken on his body.

“So it never happened and I’m glad it didn’t because breaking my neck five times in total, it’s a lot of damage,” Angle said. “And I didn’t have any upper body strength. If somebody had got me in an armbar, there was no way I could fight it. They would have ripped my arm off. So I decided that it wouldn’t be the best option for me and that I would rather stick with the entertainment stuff.”

How do you think Kurt Angle would have done in the UFC?