Julianna Pena has taken a shot at Daniel Cormier after ‘DC’ suggested that she doesn’t deserve a trilogy against Amanda Nunes.

Pena got a crack at the belt against Nunes at UFC 269 and she shocked many as she scored a submission win. After the win, the two had an immediate rematch at UFC 277 with Nunes winning by decision in a rather one-sided fight.

Since the fight, Pena has been vocal in saying she wants the trilogy but Cormier doesn’t think she deserves it.

“The work hasn’t warranted an immediate rematch,” Cormier said on his “DC & RC” ESPN show (h/t MMAJunkie). “Because if not, then every champion that loses gets an immediate rematch. It’s not like that. It just doesn’t work that way. Amanda got an immediate rematch, because she’s Amanda Nunes. Jose Aldo didn’t get an immediate rematch (against Conor McGregor), and he was the longest-reigning featherweight champion of all time. Sometimes you’ve got to move on to get back. I think Julianna’s in that position. I don’t know if the work that she’s put on paper warrants (it). Just because she survived in the last match, I think she might have lost every single round of that fight.”

Julianna Pena then saw Daniel Cormier’s comments and issued a fiery response to the former champ-champ. 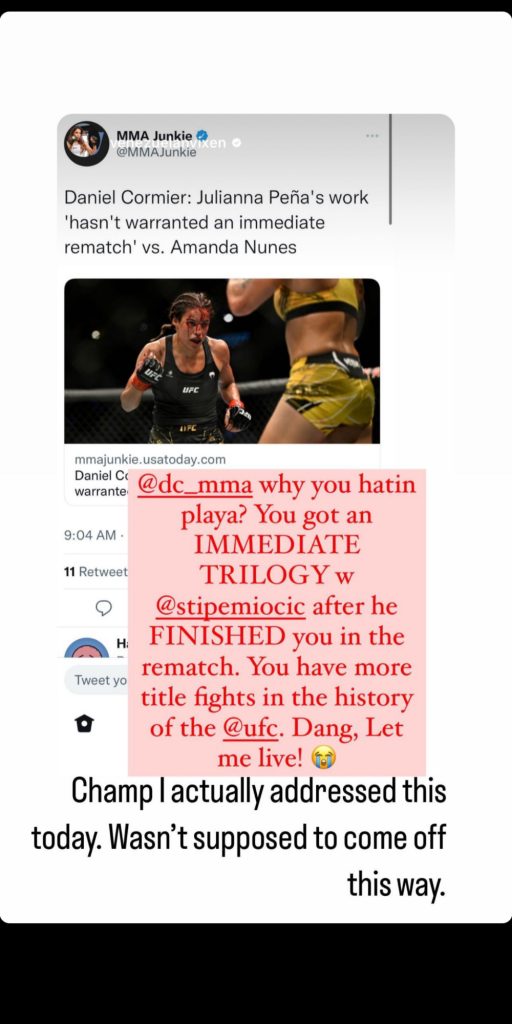 “@dc_mma why you hating playa? You got an IMMEDIATE TRILOGY w @stipemiocic after he FINISHED you in the rematch. You have more title fights in the history of the @ufc. Dang, let me live!,” Pena responded to Cormier.

Daniel Cormier then issued his own response on his Instagram story and apologized for his comments and claims he didn’t mean it like that.

“Champ I actually addressed this today. Wasn’t supposed to come off this way,” Cormier added.

As of right now, there is no word on if Julianna Pena will get the immediate trilogy against Amanda Nunes. However, she has made it clear that is the fight she wants.

Do you think Julianna Pena should get a trilogy with Amanda Nunes?

This article appeared first on BJPENN.COM
Previous articleJiri Prochazka praises Alexander Gustafsson ahead of “light heavyweight night” at UFC 282: “I think he’s still a very dangerous man”
Next articleJavier Mendez believes Khabib Nurmagomedov is on track to becoming “the greatest coach of all time”
© Newspaper WordPress Theme by TagDiv