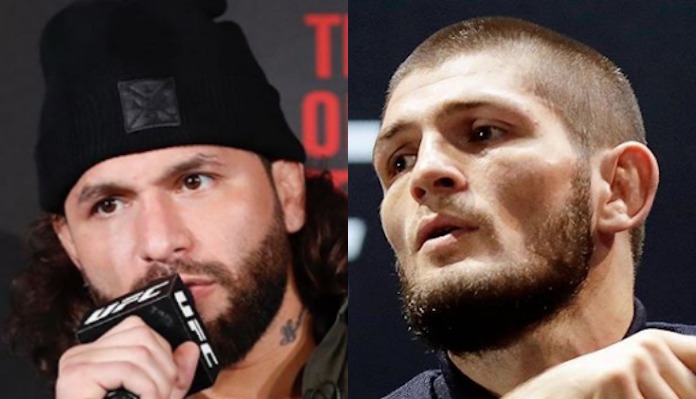 Masvidal discussed the possibility of a fight with Nurmagomedov during a Q&A on Instagram Live this week. He praised the lightweight champion, and conceded that he’d be willing to fight him in the 155-pound lightweight division, so long as the UFC makes the move worth his while.

“If they pay me what I’m worth? To go down to 155 [lbs]? A hundred percent,” Masvidal said (via RT). “I like what Khabib does. I like that he’s in the field. He’s one of the best lightweights at the weight currently. Just that obstacle alone would be enough for me to consider dropping that weight. But then, the UFC would have to be working for it.”

Jorge Masvidal is currently embroiled in a heated contract dispute with the UFC.

He was expected to be given the next crack at UFC welterweight champion Kamaru Usman, but demanded a pay bump after a banner year in 2019. Evidently, the UFC was unwilling to play ball, as the promotion ultimately awarded the next welterweight title shot to Gilbert Burns, leaving Masvidal without a fight.

With Usman and Burns set to fight at UFC 251 on July 11, it’s not clear what the future holds for Masvidal. That being said, he recently divulged during a Q&A with fans on his official YouTube channel that he does intend to fight this year.

“Yeah I’m gonna fight this year,” Masvidal said (transcript via MMA Junkie). “God willing, I’m gonna fight this year. What’s not gonna happen is I’m not gonna be played or underpaid, that’s for sure. I have a value, a formula we’ve come up with for what I’m worth, and that comes off 16 years of doing this, of seeing the field in and out. I’m not some rookie, I’m not some guy challenging for the title for the first time in my life.”

Masvidal had an absolutely incredible run in 2019. He began the year by knocking out Darren Till, followed up with a record-breaking, five-second flying knee knockout of the formerly unbeaten Ben Askren, and capped off the year by defeating Nate Diaz in the first and only “BMF” title fight. He has not fought in 2020.

Does a potential fight between Jorge Masvidal and Khabib Nurmagomedov interest you? Who do you think would win?