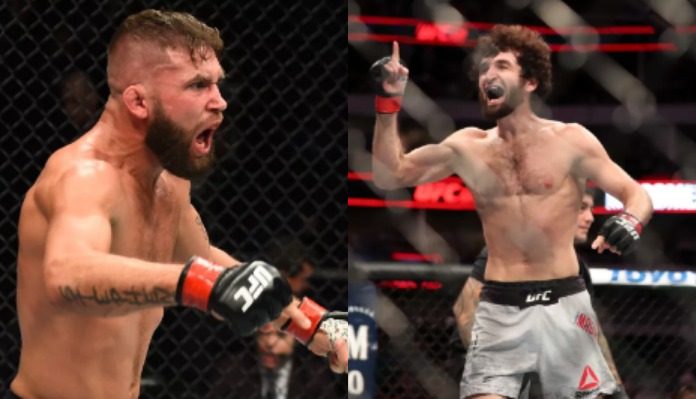 UFC 235 is still in its infancy when it comes to card building. But what we’re getting so far is looking pretty darn good.

Per ESPN’s Ariel Helwani, a featherweight clash between perennial contender Jeremy ‘Lil Heathen’ Stephens (28-15) and the rising Zabit Magomedsharipov (16-1) is being targeted for UFC 235 on March 2 in Las Vegas, Nevada.

Zabit Magomedsharipov vs. Jeremy Stephens is in the works for UFC 235 on March 2 in Las Vegas, multiple sources told ESPN. The fight isn't finalized just yet but moving in the right direction. https://t.co/KT5Nnegh1V

“Zabit Magomedsharipov vs. Jeremy Stephens is in the works for UFC 235 on March 2 in Las Vegas, multiple sources told ESPN. The fight isn’t finalized just yet but moving in the right direction.” Helwani tweeted.

For the 27-year-old Russian prospect in Magomedsharipov, a fight with Stephens would certainly be the biggest of his career.

Magomedsharipov last fought in September at UFC 228 when he extended his winning streak to 12 straight (four in the UFC) by defeating Brandon Davis with a second-round submission (modified kneebar).

Stephens, on the other hand, will be looking to rebound after having perhaps the best win streak of his lengthy career snapped by former featherweight king Jose Aldo at UFC on Fox 30 in July.

Prior to the loss, Stephens won three in a row over the likes of Josh Emmett, Doo Ho Choi, and the former Strikeforce lightweight champion Gilbert Melendez. The former two having been wins by knockout.

Zabit Magomedsharipov currently sits at No. 14 in the UFC’s official rankings with Stephens at No. 6. A win would obviously catapult him up the rankings thus potentially re-setting him up with Yair Rodriguez for their highly anticipated matchup.

As for the rest of UFC 235’s current fights, they can be seen below.