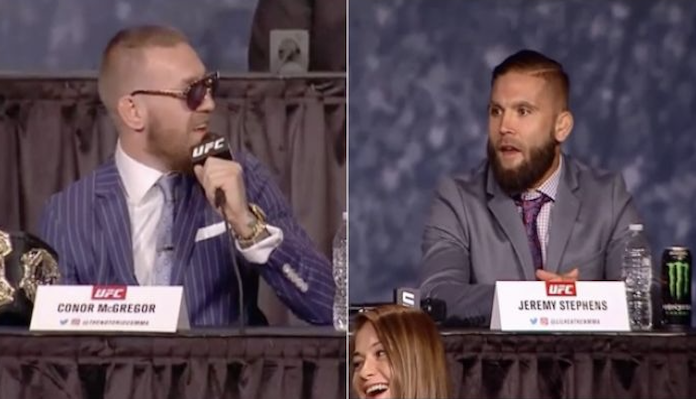 UFC veteran Jeremy Stephens still wants to fight Conor McGregor, and he says he will finish the fight with calf kicks if they ever meet.

In 2016 at the UFC 205 press conference, Stephens and McGregor were involved in one of the most oft-quoted pieces of back-and-forth in UFC history. When asked by a reporter who the toughest fight on stage for McGregor was, Stephens decided to take matters into his own hands and say it was him. Only he ended up getting absolutely roasted by McGregor.

It’s now five years later in 2021 and both fighters are still in the news. This weekend, Stephens moves back up to the UFC lightweight division after going winless in his last five fights at 145lbs, when he takes on Drakkar Klose at UFC Vegas 24. McGregor, meanwhile, was officially announced to be fighting Dustin Poirier at UFC 264 on July 10 in Las Vegas.

Speaking to the media ahead of his fight with Klose, Stephens was asked why he made the move back up to 155lbs. For Stephens, it was easy. At this point in his career, he’s all about chasing money fights, and he’s targeting both Nate Diaz and McGregor. According to Stephens, if he ends up fighting McGregor, he plans on finishing him with calf kicks.

“I’m moving up a division because I want these exciting fights. I want these matchups. F*ck a belt. I’m looking to fight a Nate Diaz, a Conor McGregor, calf-kick him clear the f*ck out of here, as well. I’m looking to get paid and laid, bro, so that’s why I’m here,” Stephens said (h/t MMAjunkie.com).

We saw Stephens land his nasty calf kicks when he fought Gilbert Melendez a few years ago in Edmonton. McGregor, meanwhile, showed a weakness to calf kicks in his second fight with Poirier. It still feels like Stephens wouldn’t be on McGregor’s radar, but if he can put on an impressive showing on Saturday night, you never know what the future holds.

Do you still want to see a fight between Jeremy Stephens and Conor McGregor one day?